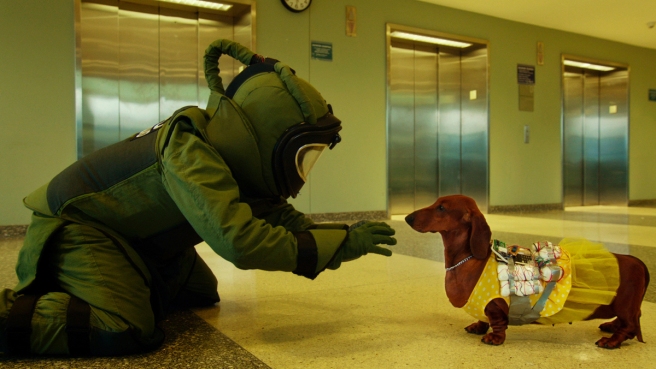 It’d be easy to dismiss Wiener-Dog as some kind of cheesy A Dog’s Purpose type of movie. It’s not that, at all.  Yes, it’s a story about a wiener dog that intersects with the lives of a four different people, but the dog might as well be an old five dollar bill that’s been passed around and around.

No one really gives the dog much attention, except maybe the kid in the beginning of professes his love for wiener dog and tries to get her to run away when learning what it means to have her “fixed.”  The other owners care for the dog, but the dog is really just there to observe… though this isn’t a movie in which we hear the dog’s inner monologue. The dog observes but has nothing to say about the events.  She’s just a fly on the wall.

Told through four vignettes, Wiener-Dog connects its characters by a shared loneliness, and the dog too.  The dog might as well be a symbolic representation of despair that you hand off to the next person, thinking maybe that will lift the melancholy around you.  Of the four owners, three give the dog away, in some fashion, and the last… well I’ll get there.

The first owner is a kid, Remi (Keaton Nigel Cooke), who happens to be a recent cancer survivor.  His parents (Tracy Letts, Julie Delpy) are wealthy, strict and a little bit distant.  While Remi loves his new dachshund, the parents do not.  Granted they do take care of the dog, but they only speak about her in terms of ownership.  The father talks to Remi about the importance of breaking the dog’s will in order to train her to behave properly, and the mother speaks of the responsibility they have to ‘fix’ the dog.  This is when Remi shoves the door open and tells the dog to run for freedom.

Remi’s father doesn’t allow him to let the dog out of the cage, but while they’re gone, Remi does and feeds the dog the wrong food, giving her some pretty awful diarrhea.  The camera lingers over her trail of shit, literally, really forcing you to see the grim aftermath.  Later, the father finds the dog having vomited blood, and he rushes her to the veterinary clinic to be euthanized.

That’s where we meet Dawn (Greta Gerwig).  One of the vets, she takes it upon herself to save the dog, but soon she seems almost to completely forget about the dog in favor of her sad infatuation with an old high school classmate, Brandon (Kieran Culkin).  Whereas Dawn stumbles nervously over her words, Brandon is calm and collected.  He’s also a lying drug addict, but when he makes Dawn an offer to join him on a road trip nowhere in particular, she joins, even when he jokes that they’re on their way to find meth, a joke that soars over her head.

Dawn is a sad character.  She’s innocent, kind and in need of protection, it seems.  Brandon is not the person to give that to her, so we clearly see the impending consequences of her misplaced affection, and surely it won’t end well.

After giving a ride to a few Mexican musicians (who gravely comment on the sadness of America), they make their way to the home of Brandon’s brother and his wife.  His brother, Tommy (Connor Long), and Tommy’s wife April (Bridget Brown), both have Down Syndrome, though this is mostly beside the point of the story other than, seemingly, to add a dimension of empathy to Brandon’s character.

Dawn takes April on a walk so they can talk about the “boys,” only adding more melancholy to her anticipated romance with Brandon.  This whole time, the wiener dog is somewhere, but it’s hard to remember where.  Symbolically, I suppose, the dog is to Dawn what she is to Brandon.  They both float here and there, and we don’t get the impression that Dawn will stick with Brandon long.  Soon she’ll be somewhere else, like the dachshund.

When Brandon and Dawn set off to leave, Dawn gives the married couple the dog as a gift, sensing that they could give her a better life than she.  After that they’re off, and we don’t know where to.

There is a kind of crazy intermission in the middle of this film.  It features a CGI’d dachshund walking through various parts of America while an upbeat country song plays.  In the context of what we’ve seen so far, it’s quite sad and absurd, as if this intermission was taken from a different movie entirely, one in which the characters recognized the importance of the animal.  Here they don’t.

We next find the dog sitting quietly on the desk of a screenwriting professor, Dave Schmerz (Danny DeVito), his last name befitting of his remarkable unremarkable-ness.  Schmerz isn’t highly respected.  He’s worked too long at a school he could care less about.  He’s a joke amongst the student body, who laugh at his repeated feedback, “what if, then what.”

On the side, Schmerz is trying to contact his agent to see if he read his latest script.  After a series of lonely attempts to reach the man who’s supposed to be working for him, Schmerz’s agent finally calls to say that he’s taken a new job and has passed him onto another agent.  The second agent plainly lies through false exuberance to get him off the phone.  And just like that, Schmerz is all by himself.

He’s the saddest character of all, actually, an isolated man partially kept isolated by a certain ambition that starts to lose its charm the longer it goes without any results.  Not only is Schmerz lonely, but his ambition and his own preferences seem to have put a wall up between him and his students.  It’s not just that they don’t respect him, but their distaste for him is understandable.  He expresses utter disdain at some of his students’ (admittedly) absurd story ideas, full of grandeur and self-importance but which we can see will add up to very little.  At the same time, he’s the man who should help them shape these ideas or rediscover their passion for them.  Instead it’s just, “what if, then what.”  Dave, his boss tells him, is too negative, and he seems to have no interest in his job.

When a successful alumnus returns to give a jaded speech about what it’s like to make a movie, he tells the students to drop out and makes a joke at Schmerz’s expense.  Schmerz, in the back row of the auditorium, promptly leaves.

In the final scene, Schmerz hurriedly packs something together while giving the same advice as always to a disgruntled student.  When that student reconvenes with a few classmates, they watch Schmerz leave the building followed by the dachshund… wearing a bomb vest.

Soon the cast of The Hurt Locker arrives to disarm the bomb, and Schmerz gives himself up to the police.

In the final vignette, the dachshund lives with an older woman, Nana (Ellen Burstyn).  Nana sits in a nice home, with a live in aid, and she has no interest in anything.  She names the dog “Cancer,” and she sits through a comically unbearable conversation with her granddaughter Zoe (Zosia Mamet), and Zoe’s boyfriend Fantasy (Michael James Shaw).  Fantasy is an artist with a wandering eye who doesn’t remove his sunglasses indoors.  Zoe is worried that Fantasy is sleeping with other women, but what she really needs, as her Nana observes, his money, $10,000 to be exact.

Nana somewhat begrudgingly gives her the money as if just to make Zoe leave.  Then she sits in the backyard and talks to younger versions of herself.  They tell her what she could’ve been in other lives, and the point is that Nana, as she is, has lived her life the wrong way.  She has failed, in other words, and all she has now is her dog, Cancer.

But then she calls after Cancer who has run into the road and is promptly run over by a truck.  The camera lingers on the smeared oval of blood and fur that used to be the titular character as several more cars unceremoniously run over it.  The end.

The characters get older with each passing vignette, and they become increasingly hopeless.  Whereas Remi and Dawn had some compassion, it felt mostly futile.  Dawn receives no affection in return for the care she doles out to others, and Remi comes home to find the dog’s empty cage, with no advance warning that his father is planning on killing it.

In the second half of the film, Dave Schmerz and Nana have given up.  Well, Schmerz has one last plan, his script, and when that fails he improvises another, the bomb.  This last ditch effort at something might as well been what happened to Nana.  She has nothing left, just a granddaughter who needs money and a dog she keeps around only because it was left at her doorstep, most likely.

Because of how unseen the dachshund is for most of the movie, we know she’s not really the point.  She just unites these otherwise unconnected characters through a sense that America is actually quite lonely.  And we’re all bathed in that culturally-conditioned loneliness.  Maybe we all start as Remi and end as Nana.  It’s certainly not an optimistic film, but it’s quite bleakly funny, and that humor at least suggests that this isn’t inherently our shared fate.

But again, this film feels quite universal.  So many of the most universal films are specific or small in nature.  And this film jumps from person to person, all with forms of the same quiet melancholy, implying that these instances are hardly individualistic.  Our problems are unique, but the emotions those problems encourage are not.