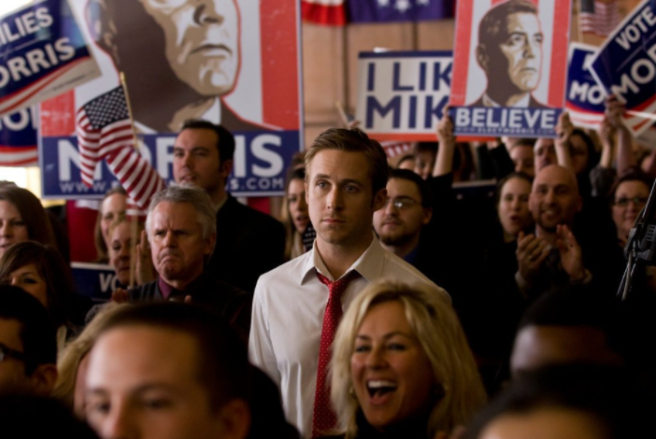 The Ides of March opens and closes with a tight shot of Stephen Meyers (Ryan Gosling), standing in the spotlight.  He’s the junior campaign manager for Governor Morris (George Clooney) when the film opens and the senior campaign manager by the end.  Governor Morris’ political prospects brighten over the course of the film as well, as Meyer’s backroom dealings have netted him the lucrative endorsement of a particular Senator, all but sealing his victory in the Democratic Primary.

But this isn’t an inspirational movie, as you may have gathered from the title which refers to the death of Julius Caesar.  The Ides of March is about a dream dying and a cynic rising.

Governor Mike Morris is the hopeful candidate, and as several people detail over the course of the film, the younger candidate always runs on hope while the older one runs on experience.  Morris is, as we will later see, symbolically what every politician eventually becomes, at least to some degree.

Meyers is a young junior campaign manager working directly under Morris’ senior campaign manager, Paul Zara (Philip Seymour Hoffman).  Zara is the realist, the experienced manager to Meyers’ hopeful manager.  Zara values loyalty, and Meyers claims to as well.  Meyers is the one who explains how deeply he believes in Morris and thinks the country will be better off with him in the Oval Office.

The film destroys his mental image of Morris as well as of himself.

Tom Duffy (Paul Giamatti), the campaign manager for opponent Ted Pullman calls up Meyers and asks to meet, offering up something important.  Meyers can’t help himself and so meets with Duffy without telling Zara, though after Zara fails to get the endorsement of an important Senator, Meyers admits to the meeting.

Zara lambasts his young aid, chiding his lack of loyalty, and though Meyers can say this was not done in self-interest, it’s hard for Zara not to see it that way.  He sees Meyers as just another hungry campaign aid who’s willing to meet with the other side if they offer him a better deal.

A subplot involves the romance between Meyers and a Morris campaign intern, Molly Stearns (Evan Rachel Wood).  Innocent at first, Meyers soon learns that she had an affair with Governor Morris and is pregnant.  Meyers pivots from the likeable, romantic lead (as you expect Gosling to be) and shows his true colors.  He becomes stoic, even sinister, as he gives her the money for a secret abortion and insists she never tell anyone about this.

The question is how far Meyers will go to protect his man, and we can already see his soul darkening, his humanity fading.  When Paul Zara tells him he’s fired, simply for meeting with Duffy, Meyers flips out and threatens to destroy the campaign with what we know has gone on with Molly.

Meyers turns to Duffy for a job, but Duffy says hiring him won’t look good since he was just fired by his opponent.  Duffy also reveals that this was his plan all along, to undermine the faith between Meyers and Zara.  This is politics, I suppose, and Meyers is just there to watch it all burn.

Empty-handed, the question is whether Meyers will leak news of Governor Morris’ affair and who he wants to hurt the most.  At this point no one is really out to get him, but the system is ruining him.  The betrayal Meyers may feel is never personal, rather just the consequences of a political game meant to strip away your empathy and reform you into some kind of pawn built only to survive.

Meyers learns that Molly has overdosed, a likely suicide when she heard that Meyers threatened to destroy the campaign, and Meyers, now deeply hurt and realizing how far he’s fallen, meets with Governor Morris, threatening to go public with evidence of his affair with Molly.  The Governor doesn’t believe Meyers has any evidence, and Meyers asks him to call his bluff.

What Meyers wants, and what he gets, is Paul Zara fired and for him to be appointed senior campaign manager.  The film ends with Meyers getting what he wants but haunted by what he did to get there.

So The Ides of March is, from the public’s view, a story of success.  A hopeful young Governor and his hopeful, young campaign manager both advance their careers and get one step closer to the top.  In the process, though, they compromise what they believe in and become a little less human but a little more political savvy.  Sure, this is an extreme example of all of this, but the point is to show what it takes to get by.  In the end Zara doesn’t take Meyers’ actions personally.  He actually compliments his young former aid, albeit grimly.  This is a game, and they all either know how to play or are learning how to play it.