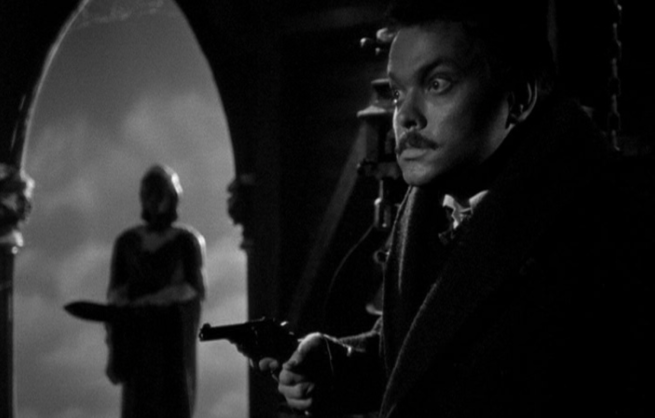 “My Charles is not a Nazi!”

Much like a Hitchcock film, Orson Welles’ The Stranger is a thriller complete with a man on the run, a case of mistaken identity and an ever tightening noose that dooms the main character in a showy third act display.

The setting is Harper, a small American town where everyone knows each other and where Charles Rankin (Welles) has chosen to settle down.  He’s a relative newcomer, having only been around for a few months, but Rankin is already a professor at the local college and set to marry the daughter of an affluent family.

Our entry into Harper follows Konrad Meinike, a Nazi purposefully released from prison in the hopes that he might lead detective Wilson to Franz Kindler, a Nazi war criminal.  Meinike quickly tracks down Kindler who is in hiding under the name Charles Rankin.  Rankin, to hide his tracks, strangles Meinike and spends the rest of the film trying to skirt Wilson’s suspicion.

The problem is that Wilson catches on to Rankin almost immediately.  Most of the film is a cat and mouse game in which Wilson pushes his way into the family with kindness and toys with Rankin, making it pretty clear he knows who he is.  It’s not long before Rankin catches on as well and figures out why Wilson is really there.

Eventually Wilson gets close to Noah, the brother of Rankin’s new wife, Mary.  In an amusing scene he tells him about who Rankin really is, and Noah takes the news quite well.  He’s never alarmed or shocked.  He just wants to know what they do next.

Along this same line of strange reactions to devastating news, Mary is so in love with Rankin that nothing he says or does will faze her.  She is so blinded by what is meant to pass as love, that she believes Rankin’s strange lies which try to explain the weird goings on around town, including Rankin’s connection to Meinike and Rankin’s decision to kennel then kill Mary’s dog.  He admits to it but then provides a disturbing justification which Mary is eager to go along with.

All this leads to a fight between Wilson, Mary and Rankin at the top of a large clocktower.  Rankin had tried to arrange for an ‘accident’ which would kill Mary, but his plans fail, and he finds himself wounded and stumbling close to the edge of certain death.  A statue bearing a sword, which circles the clock tower every hour on the hour, then swings by and impales Rankin before knocking him off the tower, to his death.

The plot is like Hitchcock’s Suspicion or Shadow of a Doubt.  A killer infiltrates a town and fools everyone around him until the past catches up to him.  This is a type of story that would seem to feed off the fear of the danger taking the form of just another person.  The danger blends in and might be living in your own home.  It’s a type of fear that feels much more connected to the later red scare of the 50’s, though this one is very much connected to the second World War, with Rankin exposed as a Nazi.

The movie is delightfully absurd.  It’s tense, to some degree, but the characters’ muted reactions to disturbing or unbelievable news is hilarious.  They’re all such kind folks willing to believe anything that almost nothing surprises them.  Stories like these are twisted and silly, and the characters never seem to act with any intelligence.

Wilson, for example, is a detective who catches onto Rankin early but is content with sitting by and waiting to take him down.  I mean, he’s a Nazi in America, and he’s cool just taking his time, getting to know the other people around.  He’s just a detective who knows how to enjoy the little things in life.

I suppose the movie is meant to show how danger can spread and lurk even in places thought to be the most safe, but the eventual feeling seems to be that Rankin, a powerful Nazi, is completely powerless when he gets to Harper.  He has his eyes set on infiltrating the affluent family and… I don’t know, working his way up the government?  But he never really gets anywhere.  He is found out early on, and then we watch him flail as he attempts to cover his own ass, only to fail mightily.  A Nazi is nothing compared to the American Dream.

The idea of a Nazi making it to America, particularly so soon after the war, might have some symbolic significance.  Somewhere in the middle of the film, we see newsreel footage of the actual concentration camps.  The Stranger was the first commercial film to show such footage, and I’d say it’s important if only to make sure the public knew what had happened in those camps and with the Nazis.  It’s important that we understand the full significance of those atrocities, and the combination of showing a Nazi in America, combined with this footage, makes the point that ignorance won’t be tolerated.  It’s important to keep your eyes open and to know what’s going on in the world.