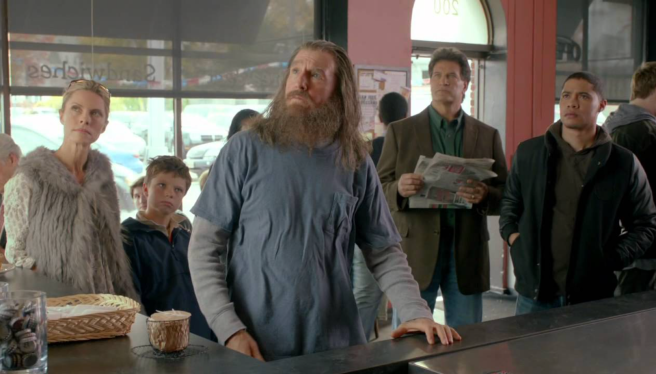 Clear History is an extended episode of Curb Your Enthusiasm.  Though Larry David plays a new character, he’s defined by the same good intentions, petty frustrations and casual self-righteousness which gets him in trouble and causes his demise.  Maybe ‘demise’ is too strong a word.  Once the story starts unfolding, you know it’s not going to end well, though the protagonist’s doom, like in Curb, is really just the final note of a long list of intertwining jokes.

As with his tv show, just about the entire movie is improvised within an elaborately plotted structure that weaves together a pretty amazing ensemble cast and small, seemingly disconnected gags.  Each scene starts out as mole hills which over the course become mountains.  In one scene the Larry David character, Rolly, can’t help but ask the owner of a local diner why she doesn’t put napkins under the silverware.  He believes it to be unsanitary, and she is appalled that he would bring this up as a concern.  In another scene he runs into an old friend, Jennifer (Eva Mendes) who has lost a great deal of weight and is now engaged.  Was the man interested in her before she lost the weight?  No?  Well then he must surely be shallow, and she shouldn’t settle so quickly.  The man he’s referring to (Curb cast member J.B. Smoove) inevitably turns out to be someone else he already knows and who he has incidentally punched.  By the end of the movie Smoove unravels the carefully constructed secret that Rolly has worked so hard to maintain for a number of years.

Clear History is a combination of unlikely coincidences, characters who explode at the smallest inconvenience and a main character who continually gets himself in hot water because he has to say something.  It’s a wonder Rolly hasn’t already made any enemies by the time the movie begins because he goes from much-adored by the small Martha’s Vineyard community to much-maligned over the course of a few weeks.

Nothing is realistic about this, but of course that’s not what this is trying to be.  This movie is a sequence of interconnected gags in which you can likely see the end coming from a mile away.  Like in sketch comedy each scene is an escalation of the one previous, and the boulder gathers momentum as it speeds downhill until a house explodes and Rolly goes to prison alongside Michael Keaton and Bill Hader.

If you like Curb Your Enthusiasm you will like this.  That’s about all there is to say, but since I feel the need to say more, is there anything more you can takeaway from a Larry David comedy?  There is something almost magical at play in these stories.  The Larry David character is at the whims of some kind of cosmic force that conspires to turn everyone against him.  Whether it’s an ill-advised comment about a woman’s dating life, forgetting to acknowledge the cuteness of your boss’ kid, or a stubborn refusal to back up on a narrow road to allow the other person to pass, ever slight mistake comes back to bite Rolly in the ass.  Every possible, subtle misstep becomes something much bigger, almost as if he lives in a world that demands perfection and punishes anything less.

One explanation is karma.  We believe Rolly deserves everything that goes wrong, not because of these missteps but because of what else is going on.  Rolly, vengeful because his onetime boss has popped back into his life, unknowingly flaunting his wealth, wants to burn his house down.  The A plot of the movie follows Rolly’s unusual need for revenge, and this malicious goal allows for everything else to happen.  For a character to face as much sh*t as Rolly gets, he must deserve it.  The comedy comes from creating a character who purposefully steps out of line and is then hit by a car, acting as perhaps explosive karma, the degree of the punishment only being equal in nature to the intent of the misbehavior.

Much of the humor comes from the idea that Rolly is never in control even as he puts everything in motion.  At first he doesn’t realize the possible effect of his behavior, and later he is completely oblivious of the good things coming his way so his destructive behavior undoes any of the possibly positive repercussions.  Rolly pushes the rock down the hill and is somehow crushed by the subsequent boulder.