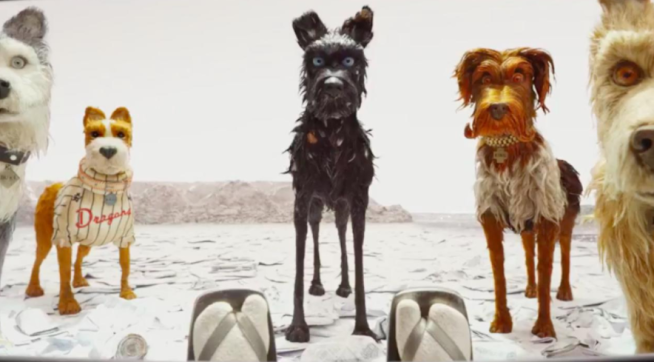 If you’ve seen Wes Anderson’s other movies, then you know what to expect with Isle of Dogs.  It’s somewhere between a comedy and a drama, complete with dog puns as well as casual mentions of horrific violence.  The plot follows a plan made by a pack of dogs to help a young boy reunite with his own dog.  The disaffected characters march forward with a strange precision, as if because they have nothing better to do.

It’s hard to describe the world of Isle of Dogs or of any Wes Anderson movie.  They are neat, symmetrical images of tormented, haunted characters.  We’re told that they are incredibly sad, even depressed, but they’re just active enough to keep the story moving forward.

The characters speak in a monotonous tone.  They can barely express what they feel, whether because they suppress their emotions or because they can’t understand them.  One of these characters, Chief (voiced by Bryan Cranston) can’t figure out why he bites people, though he admits it’s probably because he’s scared.  Two other moments in the film, probably the most emotionally-charged, take place in flashbacks depicting Spots (Liev Schreiber), the dog the young boy is searching for.  In one, Spots is assigned to protected Atari (Koyu Rankin) and is given a hearing device that will translate the boy’s commands.  Spots begins crying and says, “I can hear you, I can hear you, I can hear you,” before we cut back to the present and see a pile of bones meant to be Spots.

In another moment, Spots finds himself surrounded by a group of dogs known to be cannibals.  When confronted with this, the leader of the pack explains that they ate only one other dog, a friend who had fallen into a coma from starvation.  They ate their friend to survive.  The dog, unable to say anymore on the topic, begins to howl, and the other dogs follow suit.

There is a lot of sadness in this movie, but it’s easy to miss.  The characters become amusing in how innocent, naive and muted they are.  They’re still dogs, after all, so they behave with certain canine instincts.  One of those instincts, though, is a certain guardedness, demonstrated most clearly by Chief.  He’s the stray dog who has become the de facto leader of four other dogs on Trash Island, where all dogs have been exiled following a fear mongering campaign on the mainland.

The dogs have to fight to survive, and because of this they suppress the emotions which make them human, or human-like.  A lot of the other characters in a Wes Anderson movie feel this way.  Certain shades of their personalities are blocked out by a basic need to figure out how to keep living.  They become so numbed to the world around them, and the journey often becomes about allowing yourself to feel whatever it is that has corrupted you so.

In Isle of Dogs, the characters help Atari look for Spots out of a sense of obligation, but by the end they do it for love.  It’s a nice thought, simple to be sure, but it works remarkably well.  I guess that’s subjective.  I believe it worked remarkably well.

I’ve seen this movie twice now, mostly because I’m so fascinated by the stop motion technology, and both times the theater was packed or nearly packed.  There are several instances in the movie that evoked both laughter and a sad “awwww” from the audience.  Anderson has a knack for these moments that draw comedy from sorrow but make sure you feel the sadness all the same.

He seems to best capture that emotional impact by the selective use of flashbacks to color in a character’s backstory.  The A plot follows the dogs on Trash Island, but the story jumps around amongst several characters in different locations, so it would be easy to lose track of the emotional through line of the film.  To keep our attention, it seems, Anderson would throw in brief flashbacks to heighten the dramatic impact of a scene.

The dog pack leads Atari to the cage in which they believe his dog’s bones remain.  It’s a sad moment, but then we’re given the flashback to show what Spots was like.  It’s the moment he and Atari first met, and it’s a tender moment (“I can hear you”) that makes you forget we’ve just seen the poor dog’s bones.  When we cut back from the inspiring scene to the overhead, sobering shot of the dead dog, it drew laughter and audible groans from the crowd.

I think this cut might be the best representation of how Anderson frames sadness.  His compositions are famously symmetrical, and his characters are almost uniformly subdued.  The effect is that you’re looking at something truly awful but from a safe distance.  The sadness these characters feel would be almost unbearable if we had to look at it up close.  It’s hidden behind the characters’ own refusal to address their trauma as well as through such an organized visual palette that it doesn’t quite feel real to our world.

It’d be like when Sophie makes her choice in Sophie’s Choice.  We could either see that moment as it happened, watching her actively live through that torture, or we could look at Sophie years later, reluctant to discuss what happened but giving away much of her pain through her mannerisms.  *I’ve never actually seen Sophie’s Choice.

Isle of Dogs, like his other movies, doesn’t shy away from the darkness, but it similarly doesn’t call too much attention to it.  Within this movie we’re told that Atari’s parents died in a car crash, we see Atari pull a rod out of his head, we see that dog who died in its cage, we’re told that another dog named Butterscotch was crushed to death, we’re told about the dogs eating one of their own to survive, Chief mentions in passing that all the females in his litter were drowned, a scientist is poisoned and made to look like he killed himself and finally all the dogs believed to be cannibals are maimed and disfigured because they were experimented on years before.

Despite all this, it’s hard to say that Isle of Dogs is anything but delightful.  Granted, there are some controversies and concerns about cultural appropriation, but we can get into that later.  If anything, actually, that cultural appropriation adds to the sense of whimsy in the movie.  Anderson glosses over the details of Japanese culture in favor of depicting what Americans probably think of Japanese culture just like he glosses over the characters’ trauma.

The movie takes place in a fictional Japanese city, though it likely could have taken place anywhere.  The decision to set it in Japan, perhaps, is just a decision to play around with the stylings of a different culture.  It might be reductive, but I think Anderson tends to breeze through and yada yada so many things in his movies, that the effect would be the same even if it was set in America.  Maybe that doesn’t justify any of the poor or superficial depictions of Japanese society.  I don’t know.

This movie isn’t about Japan or about dogs or anything broader than what we see onscreen.  It’s a story about male relationships, for the most part, just as his other films are.  Man and dog, a match made in heaven.  The emotional crux of the film is the relationship between Chief and Atari.  Chief refuses to obey him but by the end accepts him as his master.

Now, like with the issues of cultural appropriation, the female characters in Isle of Dogs aren’t fully developed.  One of them is an American (Greta Gerwig) who helps lead the pro-dog resistance.  Her character doesn’t need to be white, and her character, in the end, doesn’t need to have a crush on Atari.  It’s a neat little brief love story that seems shoved into the movie just for the cutesy ending.  That character’s dog, Nutmeg (Scarlett Johansson) is the love interest of Chief, but again her character adds little to the story other than for the bow to tie over the final image of the movie.

Wes Anderson makes movies about male relationships.  His characters often have strained relationships with their parents and with their siblings.  They have all drifted apart from each other, and his stories detail elaborate plans which will help bring them together.

I don’t have a good answer for the issues in this movie.  I didn’t even plan to talk about it.  To be fair, I didn’t think of the issues of culture until I read about the movie, but the flatness of the female characters did stand out almost immediately.

I thoroughly enjoyed this movie, but those concerns about representation are valid.  As a white man, I’ve never had to look for myself within a movie.  Most movies, almost all of them even, are made for white men.  Just take the Bechdel Test, for example.  I never grew up needing to look for myself in the media around me, because it’s all around.  Anderson, or any white male director, arguably has that same sense.

He never had to search for his identity in film, and his characters rarely have to act against an external force.  I mean, there usually is one, but their journeys involve getting to know themselves better.  The characters of a Wes Anderson movie, in a sense, are so numb and disaffected because they have so little to work in opposition to.

His characters have it all and yet have nothing.  Maybe this isn’t connected in any way to his being a white man, but there’s something there about privilege.  The men of a Wes Anderson story are stunted, privileged and subdued.  Steve Zissou’s whole life is about getting revenge on a shark.  A character can only do that when much of his life is already taken care of.