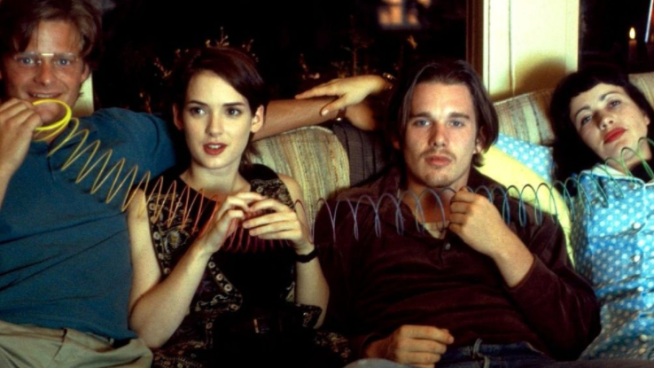 Set in Texas in the early 90s and co-starring Ethan Hawke, Reality Bites has a lot in common with a Richard Linklater movie, at least on the surface.  This Ben Stiller-directed comedy is a post-grad story following a group of Generation X-ers, though Stiller and the studio were careful not to mention that term directly when promoting the film.  They wanted the movie to have mass appeal and not get pigeonholed into a category which might alienate a broader audience.

But this movie is about Generation X.  The promotion of the movie should embrace the characters in a way the narrative eventually does.  This is a strange story because it at once empathizes with, even agrees with its protagonists, but then it criticizes them, pointing out their overt flaws.

Reality Bites is a more mainstream, less appealing version of what Richard Linklater accomplished with Slacker (1991) and then again with Before Sunrise (1995).  Both of the films observed their characters and let any broader takeaways be made by the audience.  His narrative, or what little there was, never told us how to feel.  No matter how cocksure or condescending the characters could be, the movie never clearly agreed or disagreed with them.  It let the audience decide how to feel.

In the director’s commentary to Slacker, Linklater discussed the lack of back and forth between the characters as one of them talked.  Despite being a movie that is only a series of conversations, those conversations are extremely one-sided.  One character will talk at length about a subject that interests him or her and the other will listen.  No matter how silly or insane a particular monologue was, Linklater told the other person not to react.  His or her job was only to listen, honoring the subject simply by being there.  It would be up to the audience to decide how to feel about the speech because there were no clues to dictate how we should feel.  In this way, the bigger point about this demographic of people was that they liked to talk and philosophize, but they also took the time to listen.

In Reality Bites, the narrative struggles to keep up with whatever might make the characters initially appealing.  They are admirable in their attempt to discover something “real” about existence but quite irritating in their faux nihilism and confidence that they’ve done enough searching.  They’re both curious and jaded, privileged and outcast.

The characters all have a lot to say, but no one is really listening.  Sure, Lelaina (Winona Ryder) makes a documentary about her friends, but her way of ‘listening’ is another way of speaking.  She captures what her and her friends are up to knowing she might send it off into the world through some unknown outlet.  She listens only enough to say what she wants to say.

Reality Bites has to comment on its characters, partially because they are commenting on itself.  In the story everyone is talking and no one is listening.  The characters become  more and more frustrating as the story goes on, and they never really learn any kind of lesson.  The movie is basically an anti-coming of age story.  The characters stumble through life, and when presented with a chance to learn anything, they just double down on what they believed previously.

I guess the movie is frustrating because the characters are so grating.  Ethan Hawke plays a much more aggressive, even sociopathic version of the talkative kid he played in Before Sunrise.  Anything he is unsure about is expressed through aggression.  Lelaina is selfish, Vickie is paranoid and Sammy just kind of hangs out.

This group of friends all filters through the same house, barely making ends meet but holding on so tightly to their dignity that calcifies into self-righteousness.  They need to make money, but they’re self-sabotaging and broke.  Lelaina effectively steals from her father while Troy mooches off those around him.

They’re flawed, but you recognize their youth, their uncertainty and stubbornness.  They are relatable to a degree, but as the story moves along, they indulge in their worst impulses.  By the end of the movie, we’re told that they’re right.  Their worldview is right, their self-righteousness is right, their refusal to comprise is right.  It’s frustrating because the movie seems to understand their flaws while eventually committing them to those flaws.

Another problem is that the core of the movie is the love triangle between Lelaina, Troy and a yuppie type, the MTV-esque tv executive played by Ben Stiller.  As Michael, Stiller hangs around on the fringes of the movie, much like Tom Hanks did in a movie he directed, That Thing You Do! (1996).  In both cases the A-list star’s appearance is a bit distracting, likely only there to help boost box office sales.

Michael is meant to be the stuffy type, the antithesis of everything Troy stands for.  His occupation and interest in Lelaina offers an outlet for her documentary.  It’s all a little too good to be true, as Michael insists he adores her work, and the possible success of the documentary is a way out from the mistakes of the rest of her life.

It’s all too good to be true for a reason, though.  Lelaina is thrilled that she might’ve found her path, but then Michael turns her documentary into a Real World type of show, horrifying her.  She refuses to sell out, even if she has nothing else, and turns Michael away.

In the end, everything washes away as the story focuses on the frustrating romance between Lelaina and Troy.  It’s the type of abusive relationship that will surely crash and burn, but we’re meant to root for it.  Troy is a bit of a madman, and though their affection for each other is hinted at, he’s kind of a monster.  When they sleep together, Troy ducks out early in the morning and then ignores her that night at his band’s performance.  When Michael shows up, Troy puffs out his chest and finally acknowledges Lelaina, singing a song meant to irritate her.

Anyways, Lelaina chooses Troy in the end because Michael is too stuffy and representative of the old guard.  He’s corporate, and Troy is punk rock.

It’s fine, I suppose.  The movie celebrates the characters’ refusal to sell out, but it implies there’s no compromise.  Lelaina doesn’t need to sell her documentary to MTV, but she doesn’t have to turn her back on it either.  It’s a great opportunity, and there’s some kind of compromise.  Maybe her eagerness to turn it down is romantic, but she’s also broke and resorted to stealing hundreds of dollars from her dad.  The movie ends with a final joke in which her dad calls her and asks about the money, like the theft is funny.

I’m an old man, I suppose.  I’m not much older than these characters are meant to be, but I find so much of their behavior frustrating.  They stand for something, but they don’t even know what.  These are characters whose philosophy is oddly captivating, but their behavior is anything but.

I absolutely love Slacker and Before Sunrise and even SubUrbia, another Linklater movie which focuses on aimless youth.  His films respect his characters but are able to pinpoint their flaws without drawing too much attention to them, and his lack of judgment about the characters makes me appreciate them that much more.

Reality Bites just tries to say too much about a generation of people about which it really has nothing to say.  The characters in this movie wouldn’t be caught dead watching an episode of Friends and yet their story boils down to Ross and Rachel.