Directed by the Coen Brothers

In an interview promoting Hail, Caesar! the Coen Brothers remarked about George Clooney, “He’s very adept at playing an idiot, and you have to be a very good actor to play an idiot.”

Clooney often plays the fool in the Coen Brothers’ movies, whether in O Brother, Where Art Thou, Burn After Reading, Hail, Caesar! or here in 2003’s Intolerable Cruelty.  Clooney plays Miles Massey, and before we meet him we’re introduced to his pearly white teeth, which he’ll continually keep an eye on throughout the film.

Miles is a divorce attorney, one of the best in Los Angeles.  He’s also full of vanity, nihilism and a robotic need to win at all costs.  He’s introduced to us with a laugh, and Miles never really transcends the joke his character embodies.  This is a romantic comedy, a throwback to old Frank Capra comedies like It Happened One Night, but we’re never allowed to fall in love with Miles like he is with himself.

Just as Miles isn’t quite human, the Los Angeles of Intolerable Cruelty is a heightened series of jokes.  The world we inhabit is one in which women marry rich men only for their money (barely concealing this fact) and men are around either to fall for the thinly veiled charms of the gold digger or to work tirelessly to expose the sham that is modern marriage.

Everyone in this world, in other words, works to undermine, expose or benefit financially from marriage.  Getting married is akin to making a drug deal, and that would make Miles the DEA?

Miles is first tasked with representing a woman in court who was caught cheating on her husband.  After carefully listening to her story, Miles tells her how they’re going to spin it (they can alter the truth without evidence), and later we see that he won handily, helping his client ruin her ex-husband financially.

Miles’ next client is a man stuck between a rock and a hard place.  His wife, Marylin (Catherine Zeta Jones) hired a man (Cedric the Entertainer) to get evidence of her husband’s affair.  When Miles and Marilyn finally meet, he falls immediately for her, recognizing how adept at playing this unspoken game.  He and she both know that this marriage (and apparently all of them) are shams from which they both attempt to benefit financially.

Still, Miles goes above and beyond and, thanks to some not quite legal searching, finds evidence to prove that Marilyn was out to bankrupt her husband from the beginning.  Frustrated, Marilyn concocts a plan to get back at Miles, knowing he’s in love with her.

The plot works in such a way to convince Miles to marry Marilyn.  He believes she’s now a millionaire (thanks to another marriage) and so offers to sign a prenup, specifically the unbreakable ‘Massey Prenup.’  She rips it apart, claiming to be in love with him, but it’s only after this that Miles realizes her second marriage was a sham, well, more of a sham than the first as it was completely staged.  She doesn’t have any money and then seeks a divorce so she can take half of Miles’ net worth.

The film plays out like a film noir.  Massey’s divorce lawyer might as well be a private eye.  He is hired by clients to expose a kind of dark truth, often confirming their worst fears.  Marilyn, of course, would be the femme fatale.  She even stands out in that red dress on the movie’s poster, looking like the animated parody of a femme fatale in Who Framed Roger Rabbit. 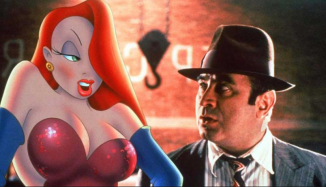 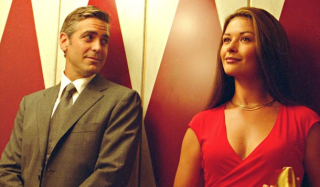 The third act of the movie, impressively, is the best part.  It pays off a series of gags and has a satisfying ending with a great final joke (another prenup emphatically torn in half).

It’s difficult to explain all the various plot twists, but they involve a trip to Vegas, a Scottish-themed wedding, an asthmatic hitman and a soap opera doctor hired for a fake wedding in which he eats his prenuptial agreement.

It’s insane and zany and wonderful.  At first it doesn’t seem like there’s much of a heart to this movie.  Unlike so many other romantic comedies in this vein, we are never really meant to trust Marilyn.  We suspect her in a way Miles never does, so we never root for their romance in a way we’re typically meant to.  Intolerable Cruelty begins as we expect, with the lovers on opposite sides of a game of wits, but they never inspire our empathy.

Still, there is something extremely childlike about Miles.  When we first meet him he is disenchanted with everything in his life.  His partner thinks it’s a midlife crisis and all he needs is a new toy, be it a boat or a new house.  Miles said he’s tried everything he can think of, but it’s not working.

In a film noir, the detective’s affection for the femme fatale is more lustful than it is here.  Miles is head over heels for Marilyn in a way Jake Gittes or Philip Marlowe never could be.  He wants to love, he wants to be in love and he’s willing to throw it all away for that love.  When he finds out Marilyn tricked him, he’s so devastated that his plan is to have her killed.  The darkness of this decision is what makes it so funny, particularly because the man he hires hardly looks the part of an experienced contract killer.  The assassin, then, never presents a real threat, and meaning of the scene is to show how the extreme lengths Miles will go to because how hurt he feels.

So I think there is a heart within Intolerable Cruelty, just not one glimpsed right away.  The Coen Brothers this time remain more devoted to the joke than to the characters, but they still find a way to make them feel, if not exactly realistic, than like the sense memory of people we know or even of a part of ourselves.

Miles is unlike anyone you know in every day life, but he reminds you of a person or of an age or of part of yourself.  He’s pulled deep from within your brain and stretched out to become his own person.  He’s one who couldn’t exist outside of the movie screen, but when projected onto it manages to say something about life as a whole and what we ask from it.