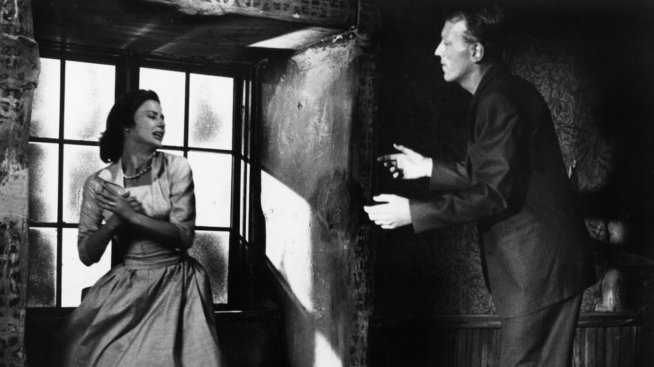 “You see, Karin… one draws a magical circle around oneself to keep everything out that doesn’t fit one’s secret games.  Each time life breaks through the circle, the games become puny and ridiculous.  So one draws a new circle and builds new defenses.”  “Poor little papa.”  “Yes, poor little papa, forced to live in reality.”

Papa, Martin, Karin and Minus are the characters of Through a Glass Darkly.  They stay at a summer cottage, a setting that presents idleness and plenty of time to think and turns each activity into something kind of horrific.  In Bergman’s world it seems that to think is to mourn.

Papa delivers the above quotation.  He confesses his own sins to daughter Karin.  She is a schizophrenic and has discovered a diary in which he admitted to a morbid fascination with her disease and the way it will ruin her.  Karin’s mother had the same disease until she died, and with that speech Papa apologizes to Karin, acknowledging that his “fascination” is really nothing but a coping mechanism.  He is a struggling writer who uses his art as a way to distance himself from family and reality.

Karin is devastated through much of the film.  Her mood swings grow, and the men around her struggle to comfort her.  Martin (Max von Sydow) is her boyfriend, though she mostly challenges him, wondering how he could possibly put up with her.  Her father poses the same questions to Martin, likely as a way to project onto him his own fears about his daughter, the ones he apologizes for in the end.

Minus is Papa’s son and Karin’s brother.  Karin mostly pushes him around, tormenting him in the ways siblings often do, but based on her illness we see such torment in a much more sinister way, as a sign of the disease’s growth and Minus’ frustration as something less immediate and more broad.  He can see the toll this takes on his sister, and the film will end with him looking to his father for answers much as Karin did to her father in the scene quoted above.

Everyone in Through a Glass Darkly is looking for something.  This is most clearly seen with Karin as her disease has led her to experience new hallucinations.  She believes someone is behind her bedroom wall and will come out to take her to another world.  She believes the voice she hears to be that of God, and the others can only look on with despair as she describes this to them.  Eventually the voice shows itself (only to her), and she screams out in horror before Martin sedates her.  Then she explains that what she thought was God was a spider that tried to rape her.

So yeah, pretty horrific.  Bergman’s film makes you feel the weight of Karin’s disease and the effect it has on those around her.  Like with his other films (most notably Persona), you can sense what’s at stake here.  This isn’t just about characters coming into conflict with each other because such conflict is only the result of a conflict with life itself.  What Papa, Martin, Minus and especially Karin are fighting is their own mortality and awareness of that mortality.

Papa asks Martin if he’s ever wished Karin would just die.  Again, Karin is his daughter, but he admits to seeing her death as a sort of mercy killing.  If all they have is suffering then what’s the point?  Martin insists that he has never had such a thought, but even Karin herself pushes Martin, believing he must surely want to be with someone more stable.

Through a Glass Darkly is a self-contained story, but within that small scope it feels massive.  Because we never leave the island and neither do the characters, Bergman effectively makes it seem like their world is the entire world.  They might as well be the last remaining survivors of some kind of apocalypse, and the degree to which they grapple with their own mortality suggests they’ve experienced something that demanded such ideas.

These are tortured figures struggling to make a connection.  In the most intense moments, one character will face the camera (though not looking at it) while another will look right at that character, as if seeing directly into their soul, looking not just at them but through them.  This is the same visual motif seen in Persona, and in Through a Glass Darkly it helps emphasize the distance between each character.  One can’t bear to look at the other, and the other is trying their damnedest to see deep into the first.  One resists any connection while the other tries much too hard to find it.  If you see a strong, stable connection as a 50/50 effort between two parties, the attempts at connection in this film are 0/100 or something like 0/1,000.  One tries too hard, the other not enough.

This idea says to me that you can’t really connect with someone if you’re looking too hard.  Underneath everything is nothing (stay with me).  We are alive now, as Papa says, as a temporary break from eternity, from a death sentence.  If you look too hard through everything around you then you’ll see nothing but despair.  I guess that’s called depression.

So these characters struggle with life because they either ignore it or try too hard to see right through it, like someone in the audience at a magic show looking desperately for hidden wires, magnets or identical twins.  You’re just ruining the experience by trying to understand it.

In the final moments of this film, Papa comforts Minus after Karin has been taken to a hospital.  They come up with an answer to their despair, that God is love, and since they love Karin, then she must be protected.  But based on the above quote and how we know Papa feels, we know this isn’t the answer, just a coping mechanism.  So it’s bittersweet and incredibly melancholic.  He provides comfort in the face of despair, and they learn to push forward.