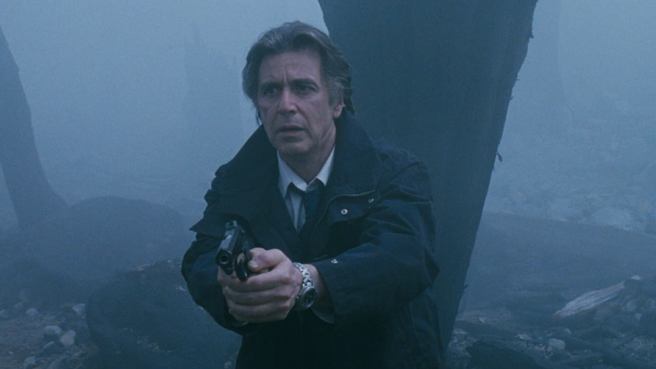 Will Dormer (Al Pacino) walks the plank in Insomnia.  He’s an aging LA cop, sent deep into Alaska for a murder that doubles as a form of exile, like sending Napoleon to the island of Saint Helena.

Will’s recent backstory isn’t shown, but it’s hinted at, discussed and picked apart throughout the film.  The plot deals with the death of a seventeen year old girl, but as Will tracks down the killer, his recent actions and new ones intertwine his fate with that of the man he’s hunting.  The course of the story works to fulfill an unspoken, thematic connection between the two men.  They are both responsible for a murder, and by taking down the killer, Will must dive into the abyss with him.

It’s a good story, consistent in tone and theme.  Pacino is great as the tired hero who suffers from insomnia in the small Alaskan town where the sun never sets this time of year.  He loses his grip on reality, and his character arc takes him to a point where he accepts how little control he has and may ever have had.

I like stories like this, where from the first shot we jump right into the plot.  The Coen Brothers’ Fargo starts in a similar way.  These characters have backstories, and exposition, like railroad track, still needs to be laid down, yet the story is in motion from the get go.

We meet Will and his young partner, Hap (Martin Donovan) on the bumpy plane ride into the wilderness.  They could be criminals in the back of a prison bus with how out of control they already appear, at the mercy of the people and the landscape around them.

The murder they are here to investigate is quite straight forward as far as cinematic murder mysteries go.  The girl is likable enough but with a kind of secret double life that opens up intrigue into who she was and who might’ve killed her.  We meet the abusive high school boyfriend, the only possible suspect other than the real killer who is played by an A-list star (Robin Williams), meaning he is most definitely the killer.  Why else would he be in the movie?

Insomnia doesn’t hand Williams over to us right away, but neither does it drag out the reveal.  Because there is meant to be no third act twist involving who the killer really is, I think it might’ve been better to acquaint us with Walter Finch (Williams) right away.  We meet him early enough that he is meant to be an important, fleshed out character, but late enough that his introduction serves more as just another plot point.  Is he there for the surprise factor, just another roadblock to the hero’s objective, or is he there to grow alongside Will as the story chugs along?

The film tries to do a little bit of both with him.  Williams is eerie the first time we see him, shot in silhouette and demonstrating a sort of sixth sense that makes us see him in the same light as other psychopathic, creative movie killers like Hannibal Lecter.  Soon, however, we’re introduced to Walter Finch as a troubled soul, but one who insists the girl’s death was an accident.  He is scared and uses Will in his effort to escape conviction.  This fear crumbles that Hannibal Lecter image.

And I think the film struggles to balance these two representations of the big bad wolf of the movie.  By the end Finch will return to being the monster he’s first introduced as.  Our final moments with the character reaffirm the idea that he’s one of those calm, collected, insane murderers who craves control and rarely loses it.  The way he toys with Will supports this idea, and yet as we meet the guy he’s more of a simple-minded, childlike loner.  He starts as Hannibal Lecter, becomes Lenny from Of Mice and Men and then returns to being Lecter.  This never feels like an effective storytelling trick, rather it’s just inconsistent.

As for the story, the reason Finch reaches out to Will is because he witnessed Will kill his partner, Hap.  Early into their investigation they seem to have the killer cornered, but when he escapes, Finch, Hap and the rest of the crew attempt to follow him into a dense fog.  This is the best visual of the film, the same one that is on the poster.  Will has his guard up, his gun drawn, and he scours a thick white purgatory with no hope of resolution.  When he sees someone nearby he shoots.  As he kneels over Hap’s body, stunned, it’s Hap who uses his dying breaths to accuse Will of killing him in cold blood.

See, Hap had only the night before informed Will that he was going to work with the Defense Attorney to give information regarding Will’s failure to follow protocol in an earlier case.  Will is a dirty cop who insists he broke the chain of command for the right reasons.  This explains why they were sent all the way to Alaska, to cool off for a bit, and their brief fight, in Hap’s mind, means Will killed him on purpose.

Will knows that others might see this in the same light, so he lies, saying Finch shot Hap, and the most effective parts of the story detail his desperation to cover up the crime.  Finch comes forward to Will, wanting to work together to protect each of them since they both have dirt on the other.

Will must try to track down Finch in person and figure out a way to bring him down while not confessing to his own crimes.  In the background of all this is a young, optimistic detective named Ellie (Hillary Swank).  She idolizes Will and is then assigned to investigate Hap’s murder.  It seems a pretty open and shut case until Will, in a moment of weakness and pride, tells her to double check that she got the report correct.  This is the motivation which leads to her realization that Will lied about where the shot came from.

So Insomnia offers several methods to Will’s demise.  The walls are closing in on multiple fronts, and Pacino sells Will’s growing madness.  With every scene you can feel his fatigue, the weight of his eyelids and the increasingly blurred vision.  No film will make you as tired walking out of the film as this one.