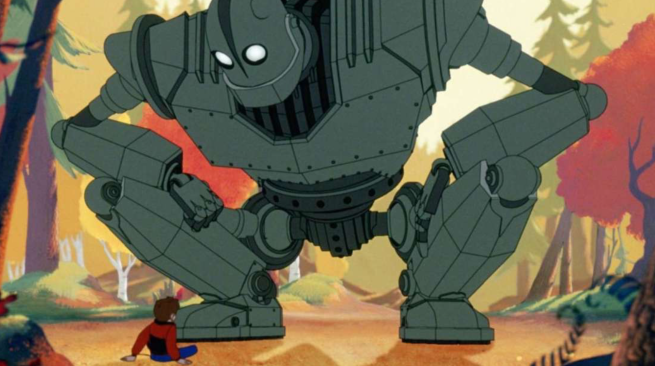 The Iron Giant lands in tiny Rockwell, Maine.  It’s a fishing village, and the intimacy of such a small town allows for a good microcosm of America at the time as a whole.  The story takes place in 1957, a time smothered in post World War II paranoia, but our perspective into this world is young Hogarth Hughes, defined by a pre World War II innocence.

When the Iron Giant shoots out of the sky, Hogarth is the first to run into him.  He’s enamored with a sense of adventure, and he doesn’t shy away from the large creature, particularly after the Giant demonstrates a relatable vulnerability when he gets stuck in a series of power lines.

Hogarth looks at the Giant like Elliott looks at E.T. in Spielberg’s famous movie.  They develop a similar connection, but of course, just like that 1982 film, the government gets involved.

Where Hogarth sees a friend, the U.S. government sees an enemy.  It doesn’t matter where the Giant came from or even who’s behind it.  “The Russians? The Chinese? The Martians…..Canadians? I don’t care! All I know is we didn’t build it, and that’s reason enough to assume the worst, and blow it to kingdom come!” – Antagonist Kent Mansley

Mansley is the man sent up from Washington to investigate claims of strange happenings in Rockwell.  He doesn’t buy the testimony of a shaken sea captain, and he certainly wouldn’t listen to the words of a little boy.  When his car is first chomped in half and then disappears altogether, however, his eyes light up.  First it’s fear, then it’s excitement at the possibility of reeling in a big fish and jumping up the career ladder.

Mansley’s obsession with capturing the Giant is one of the more delightfully energetic aspects of the movie.  He’s a cartoon villain in all the ways you expect, but he begins to duel with Hogarth like just another schoolyard kid.  In his obsession and fear he reduces himself to his more basic, childlike instincts, becoming someone as obsessed with fantasy as Hogarth but for all the wrong reasons.

The rest of the U.S. government, as personified by a military general, doesn’t believe Mansley.  They need direct evidence that something fishy (I know) is going on in Rockwell, and the film ultimately offers an optimistic perspective that the people who might harm our country (like Mansley) aren’t one in the same with the U.S. Army, the tool through which Mansley would seek to cause harm.

Anyways, to the army general Mansley becomes one of those ranting and raving “kooks” who insists they’ve seen something but whom the others regard as crazy.  You see it in other Cold War era horror movies like Invasion of the Body Snatchers and The Blob.

Early in the film the sea captain who first saw the Giant tells his friends about it in a diner.  They don’t believe him, but then Dean McCoppin, a local metal scrap collector, overhears them and says he saw it too.  Hogarth hears this and becomes enraptured with what Dean saw, but to that Dean replies, “Sorry, kid. I didn’t really see anything. But if we don’t stick up for the kooks, who will?”

The “kooks” could be the people who believe in something unmistakably unimaginable just for the sake of believing.  That’s Hogarth.  He embraces the fantasy that the Iron Giant represents, and he wants nothing more than to preserve that fantasy as it is.  The plot concerns his efforts to maintain the suddenly new status quo while others would seek to do harm.

Mansley is the one who similarly believes in the same fantasy, but he immediately seeks to destroy it.  These are two antithetical responses to the same thing, but they’re both founded on the same belief in something fantastical.

And I guess that’s what paranoia is as well.  The film is so clearly about America’s postwar fears, mostly of communism but of so many other things too.  It really boils down to communism, but from that the country feared anything new and perhaps radical.  Even if that radical thing was wholly good, just the fact that it was different was enough to encourage fear.  I mean, we still see that today.

But like in most good stories, the hero and villain are two sides of the same coin.  The people in the middle don’t believe in the Iron Giant and wave away its existence.  Kent and Hogarth share a belief.  I’m not sure if that’s a good thing, but there’s something to that, isn’t there?

It might be easier for Kent to ignore the problem or to simply not believe the Giant exists.  Why should he?  It’s a big fish to fry, and his obsession with it might be born of a strange, at onetime admirable sense of will.  He believes the Giant exists when his car disappears.  He doesn’t see the Giant, but he believes in the circumstantial evidence.

The film celebrates the “kooks,” though Mansley is a cautionary tale.  His arc might be more substantial, but we see him in so many kids movies.  He’s the villain who isn’t afraid to go Mano e Mano with a child.  This both mocks the villain while raising up the kid hero, making them feel like an adult playing in the big leagues.

Like in so many other children’s films, The Iron Giant ends on a positive note, and it completely unwinds the villain.  It’s not enough that the villain loses but that he embarrasses himself and falls prey to extreme cowardice, exposing his true colors.  The villain is almost always (it seems) driven by fear, and by the end they succumb to that fear.