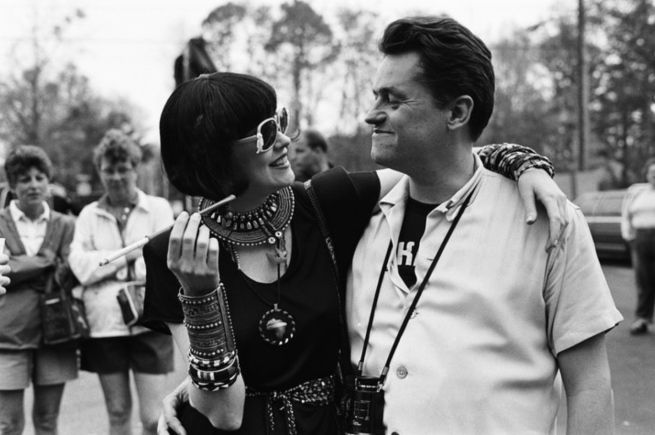 A yuppie and a wild child hit the road, turning into something like Bonnie & Clyde lite in Jonathan Demme’s Something Wild.  They are two polar opposites, and by the middle of the film they finally meet somewhere in the middle.  By then the stakes are raised, and while the first half of the film resembles Martin Scorsese’s After Hours, the second half turns this into something more sincere and melancholic.

Charles Driggs (Jeff Daniels) and Lulu (Melanie Griffith) meet each other as broad characters, defined almost immediately by what they wear and how they talk.  We understand the dynamic right away.  He’s a recently promoted Vice President at some stuffy, money-making company, and she’s an impulsive, sometimes reckless free spirit.  Were this to be nothing more than a comedy, that would be all we need to know.

Lulu confronts Charles outside of a Manhattan diner where he skipped out on his bill.  Underneath the suit she recognizes a rebel and says as much to him.  He nervously denies all allegations and cowers at the thought she might turn him into the cops.  Lulu capitalizes on this weakness and convinces him to forgo the rest of his workday and hit the road with her.

Charles confesses that he’s married with two kids, but soon they drift through a cheap motel where she handcuffs him to the bed, calls his office and more or less encourages him to break free and improvise his way through the day.  Lulu here is the template for what would later become the Manic Pixie Dream Girl, the character who comes in and shakes up the straight-laced man’s life (Garden State, (500) Days of Summer, Elizabethtown, as well as in Ruby Sparks, a film which deconstructs the character type).  She disassembles Charles’ domestic way of life, and we get the sense that he is finally learning how to live the right way.

At the same time there is a sadness to Lulu’s character.  She isn’t just there to handcuff Charles, to crash cars and dine and ditch.  At some point she asks him to call her Audrey and introduces her to her mother as her new husband.  The ruse continues as they go to Audrey’s 10 year high school reunion, for the class of 1976 (the bicentennial).

Several things happen at this anniversary, and I think it’s important for a few symbolic reasons.  First, the fantasy on which Charles and Lulu continue to ride now carries into a more domestic way of living, one it’s hard to imagine Lulu settling down into.  The fantasy remains, but it becomes a little more grounded and thus maybe a little more easy to project in the future.  Is this a one night thing or a forever thing (not that there isn’t a middle ground as well)?

We see Charles break free a little more, taking some control of their relationship for the first time and just enjoying the hell out of things.  He runs into a coworker and briefly reverts into his nervous self, but the new, confident Charlie wins out.  As Charles begins to stand tall, however, Lulu starts to come down from this natural high.

Audrey is Lulu’s real name, not simply an altar ego.  We learn this when Ray (Ray Liotta) shows up at the reunion, a sinister and charismatic presence just as in Goodfellas.  You see, Ray is technically still married to Audrey, so he sees right through their lies.  This means that the fantasy begins to crumble.

By this point Charlie seems to have developed sincere feelings for Audrey, and only later do we learn that his wife left him nearly a year before.  Just as Audrey lied, so too did Charlie.  What I find most fascinating about this is the respective lies come as a bit of a surprise.  We think we have each of them figured out when they’re first introduced onscreen, but there is much more going on underneath the surface.  Only past the midpoint do we figure out who they are, and this empathy colors in our perception of the rest of the film as well as what came before.

Something Wild lets you think it’s a broad comedy, but it’s much more than that.  It’s offbeat to be sure, but there is so much to relate to in each of these characters, even in Ray the wild card as well.

There is some symbolism here too.  The Filmspotting podcast made many good points about the film in episode #634, highlighting how the film might just be more than a comedy.  It’s a story about happiness, perception of self and of others, about the rise of the “me” generation in America and about the American Dream (though you might be able to make that argument about a number of films if you dig deep enough).

It’s something that escaped me while watching the film, but that gap in time between Audrey’s high school graduation year (1976) and the story’s present (1986), is huge.  The bicentennial celebration taking place the same year as their graduation ties Audrey (and Charlie by proxy) to America, even if just in the briefest of ways.  The point is made, and the imagery will certainly stick with you.  The reunion sequence is long, letting us soak up the environment, loaded with reds, whites and blues.  The celebrations seems to be as much about America as it is about Audrey’s graduated class.

The other point is that while we know this will be a journey for Charles Driggs, it is similarly a big journey for Audrey.  If he needs to step out of his comfort zone a little more often, so too does she need to find hers.  Both are extremes in their own way, and they learn to settle somewhere in the middle.  Though they’re on a similar journey and undertaking it side by side, they each learn something unique about what it takes for them to be happy.

And isn’t that all this is?  Comfort, joy, self-satisfaction without being smug?  It’s a type of silent confidence that your life is going alright, regardless of the storm around you.  Charlie and Audrey find that satisfaction by the end, and the film ends on a positive note (though I’m leaving out several plot points over the last hour of the film).

At the same time the film isn’t just about them.  It’s about us as a whole.  This isn’t just using the America imagery, though that backs it up, but rather the focus on so many memorable side characters who may show up for only a shot or two.  These are characters who, in other movies, might only be there to fill out a scene and are otherwise meant to remain anonymous, slightly accessorized mannequins, but who in this film are fully realized.  This gives the film texture and draws attention to the world around these characters.

One example early on is the waitress with whom Charlie interacts, calling her by her first name.  He tells Lulu that he does this because he figures that’s the point of wearing a name tag, to open up a sort of dialogue between the two characters even in such a transactional setting.  Later on he will continue to call the waiters and waitresses by their names, giving them even the slightest characterization when none is required.

Other moments draw attention to a young cashier, bored in her small town and waiting for someone (like Ray) to come sweep her off her feet.  There are the kids beat boxing outside of a gas station inside of which works a very charming young man who upsells Charlie with a number of tacky Virginia gas station articles of clothing.  There’s the older man who helps Charlie’s hangover by offering him a particular drink and the following advice, “It’s better to be a “living dog than a dead lion.”

That line was apparently ad-libbed by the actor and kept in the film.  Daniels suggested his character repeat the line later in the film, and it’s a pretty good summation for the film, about living your own way, even if on the surface it looks to be a meek way of being.  If it works for you, then that’s all that matters.

Other characters include the congregation of a black church outside which Charles parks as he’s spying on Ray and Audrey.  One of them, a young girl, comes up to ask if he needs any help to which he responds, somewhat surprised, that he doesn’t.  The moment is certainly not an attempt at humor, and you get the sense that she can see whatever it is that bothers him, no matter how deep inside it resides.

Something Wild is simply just a really good film.  It’s funny, dramatic and strangely poignant.  All the performances are great, particularly Liotta in his first movie role, and the actors all have a lot to play with.  In Daniels’ performance you see a little of his character from Terms of Endearment, Dumb & Dumber and even the self-importance of The Newsroom.

The film might alienate some viewers with its abrupt tonal shifts, but because I knew so little going in I quite enjoyed the unexpected ride.  I admire that a film like this (and many of the 80s in fact) is so willing to go in such different directions.  I read a lot of complaints (and have them myself too) today about movies betraying their own genre expectations.  Whether due to a particular plot point or tone, a comedy that grows serious or a drama that aims for a few laughs sometimes rubs people the wrong way.  I mean, I felt that way about Alexander Payne’s Downsizing because it felt to me like the film tried to cram 4 different movies into one.

Recent movies like The Big Sick and other Apatow movies do a nice job of walking the fine line between humor aimed at younger audiences and a sense of catharsis by the end of the movie.

The film I’m going to write about next, 1989’s Parenthood, similarly walks this line, as does James L. Brooks films like Terms of Endearment (1983) and Broadcast News (1987).

Damn, this movie is just so layered and rich.  It’s a comedy, and it’s not exactly a slice of life, human comedy, but it zeroes in on something grounded and real.  Our heroes are the most wacky, broad characters of the movie, surrounded by more realistic side characters, and this runs counter to most mainstream comedies which seek to surround the handsome leading man (Bradley Cooper, Jason Bateman, even Steve Carell) which wacky sidekicks whom they can react to.  And in Something Wild we of course learn that our heroes’ (including Ray) broad exteriors are masking deeper insecurities.  Maybe the best way to illustrate the depths to which this comedy goes is the following photos… 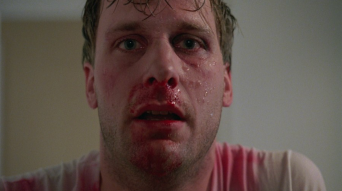 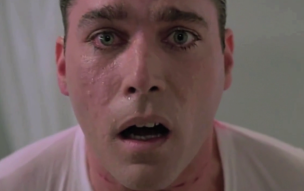 Those images come from the same movie that produces this scene… 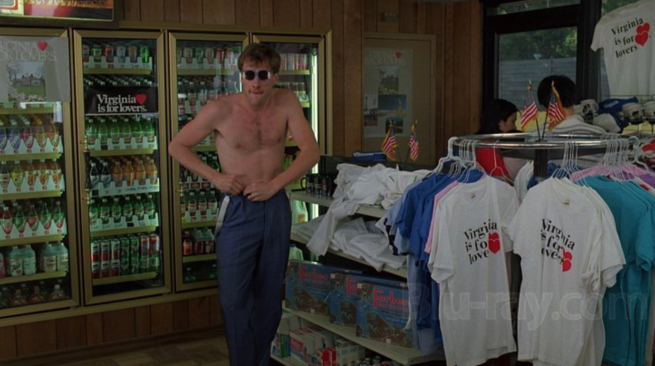