Parenthood is a heartfelt, sincere family comedy, and it seems to me like they don’t make many of those anymore.  The closest I can think of is 2011’s Crazy, Stupid, Love.  These movies are inherently optimistic, and while they showcase some characters at their worst, they only do so to show how they (and we) can be better.  In Parenthood everyone is capable of being loved and loving in return.  It’s like a long episode of Mister Rogers’ Neighborhood.

Maybe it’s just the old man in me that admires these sentimental, earnest depictions of people and life.  It can certainly be cheesy at times, but there are enough human moments to make the characters more than PSA mannequins.

Part of that sincerity comes from a willingness to make the characters ugly and at times unlikable.  It matters that we see them at their worst because it tells us, perhaps just subconsciously, that the film isn’t handling these characters with kid gloves.  These aren’t handsome leading men and women who can do no wrong.  They are uncertain, a bit messy and more than a little insecure.  It’s the self-doubt which weighs them down, but on the flip side it’s that self-awareness that helps lift them back up by the end.

There’s a lot going on here.  The family is large, with Steve Martin first on the call sheet.  He plays Gil, a 35 year old father of three, along with his wife Karen (Mary Steenburgen).  Gil has three siblings who all play an important role in the film.  There are two sisters, Helen and Susan (Dianne Wiest, Harley Jane Kozak) and a younger, reckless brother named Larry (Tom Hulce).  The three oldest siblings all have families of their own and particular marital or parenting challenges.  The film tracks the course of these three storylines, as well as one involving Larry and his father, Frank (Jason Robards). 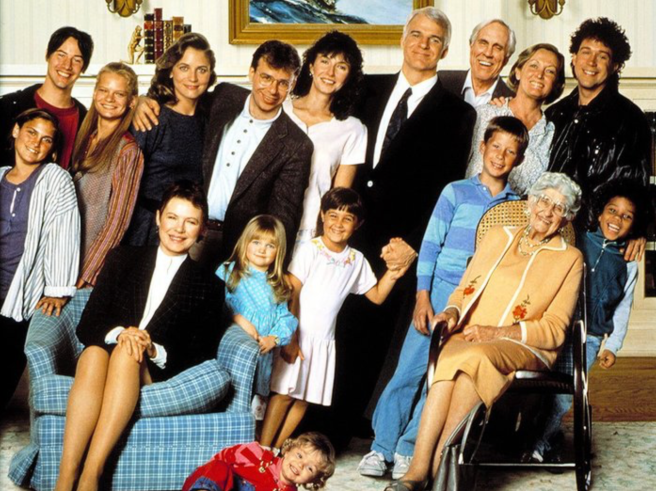 It’s a big family, and the individual storylines all have something to say about parenting.

First, Gil and Karen: Their three children are a handful, in particular their oldest son, Kevin, whom the public school says needs a therapist.  Gil frets over his son’s future, and several imagined flash forwards illustrate his fragile state of mind, occasionally optimistic that his son will be a well-adjusted valedictorian thanks to Gil’s little league coaching and sometimes paranoid that his son will become a school shooter (yes, the movie goes there) because of the position Gil puts him in during a game.

The stress affects Gil’s and Karen’s marriage, but the melodrama is never raised too high, and their mutual frustrations are just a part of the roller coaster of life (a metaphor which is used as one of the film’s final, cathartic notes).

Helen fears that a lack of a father figure is hurting Garry, but then Tod becomes a strong presence in the boy’s life, and together the four of them form their own family.  It’s a particularly heartwarming arc because you expect Tod to show up as the one-note joke of a character, but we see the depth to his kindness, buried beneath the surface.

Susan and Nathan: Together they have a bright daughter, Patty, whom Nathan (Rick Moranis) hopes will be a genius.  To encourage this imagined future he refuses to treat her like a child and instead raises her with high-minded literature and math exercises.  Because he believes a child’s growth will be compromised by having a sibling born within four or so years of him/her, Nathan refuses to consider having another child.

Susan wants another child, and she takes steps that might lead to her getting pregnant without Nathan noticing.  He does and grows livid.  Susan tells him she’s leaving, but a last ditch effort saves their marriage (though this was the only storyline I wished hadn’t ended on such a positive note).

Frank and Larry: Frank has a clear favorite, his youngest child.  Larry is 27 (but looks much older) and shows up for the first time in years, needing a place to live because of some financial troubles.  It’s unclear why Frank loves him so much more than the others, but his preference is painfully obvious.

Larry surprises them all by bringing along a son, Cool, whom he only recently found out about and whom he shows no interest in.  It’s a sad storyline that washes away most of the attempts at humor with his character.  Instead of playing one of those classic screw ups, all of Larry’s shortsightedness and selfish money-making ploys are instead incredibly solemn.

Frank slowly opens his eyes and sees the ways in which Larry refuses to grow up.  His youngest son, it turns out, owes $26,000 to mafia-like people, and Frank agrees to cover the debt as long as Larry agrees to learn the family business and grow up a little.  In perhaps the most somber moment of the film, we watch as Larry agrees but then immediately squirms out of his side of the deal, all while Frank lets it happen, knowing that it’s best for Cool if he lives with Frank while Larry leaves the picture for good.

These storylines all run parallel to each other.  When Helen and Julie have their falling out, so too does the relationship between Susan and Nathan seem to run its course and Gil and Karen appear to run into marital strife.  Similarly the stories all turn around at the same time.

The film ends with a lot of children.  Karen reveals that she’s pregnant, a stress which eventually brings her and Gil closer together (though not until after a painful moment in which Gil exposes a much uglier side), just as Julie and Tod learn they themselves are expecting a child.

In the final scene another surprise baby is born, and the film ends with what feels like a season finale of some family-friendly ABC show, with all the characters there in the waiting room, arms and hearts open.

Ron Howard made Parenthood.  He’s one of those directors, like Rob Reiner, who seems to have been around forever and has made so many movies and yet has no overt style.  I’m sure a quick deep dive might reveal something that otherwise sails right over my head, but he’s a director who has made comedies (Night Shift, Splash), Hollywood dramas (Apollo 13, A Beautiful Mind, Cinderella Man, Da Vinci Code), a kids’ movie (How the Grinch Stole Christmas) and even the recent Solo: A Star Wars Story.

I don’t really have a point to make about this, just that Howard is a bit of a chameleon.  He’s a steady hand who can fit multiple genres.  Without an overt sense of style (like Paul Thomas Anderson’s anamorphic lens, Tarantino’s dialogue, Scorsese’s dollies, etc.) Howard allows the sincerity to breathe.  I get the sense that everything Howard wanted the audience to take away from this film was there in the script, within each character’s arc, and it was his job simply to preserve it.