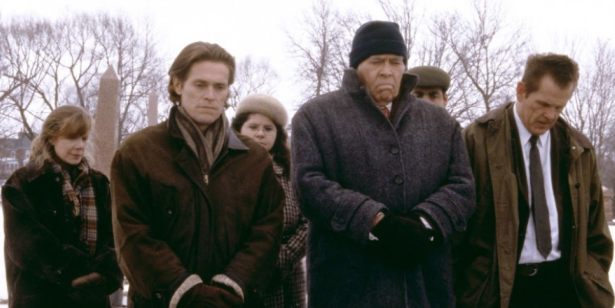 There are a lot of murder mystery movies out there in which the investigation offers unspoken redemption for the troubled protagonist, whether it’s a cop, a private detective or just a motivated relative of the deceased.  These characters might be alcoholics, they’re probably divorced, and their lives have crumbled to the point that only the interest in the investigation stands like charred ruins of the rest of their lives.

For a detective, the investigation quickly becomes more than just their job.  You see this in Chinatown and many other films noir as well as in a movie like Sidney Lumet’s The Verdict.  The investigation (or court case) offers the main character a way to be better than themselves, to signify their first steps forward like Neil Armstrong’s walk on the moon.  It’s gotten to the point that I can’t remember the last time in a movie a well-adjusted character investigated a crime.

All of that is here in Affliction, but Paul Schrader’s story dives deep into the abyss of Wade Whitehouse’ (Nick Nolte) misery.  He’s a cliche of the wilting police officer when we first meet him.  He’s divorced, and try as he might, his daughter just can’t stand to live with him.  He leaves her for a brief drink and a smoke with some friends, and when he returns, she says, “Dad I love you, I really do, but I want to go home.”

Wade is pissed.  He sends his daughter home but rants and raves to local dive bar regulars about his plans to consult a lawyer for custody.  His resentment towards his wife rivals but doesn’t quite match the same feelings held towards his father, an abusive alcoholic named Glen (James Coburn).

In grainy, handheld flashbacks we see Glen at his worst.  He’s an intimidating force, a drunk who hits his own children and mocks them as they run crying to their mother.  Soon we will meet him in the flesh, still alive, very grey and just as drunkenly stubborn.

Glen is to Wade what Palpatine is to Darth Vader.  In this comparison, Wade’s Luke Skywalker is a tender local named Margie (Sissy Spacek).  She offers him a warmth that Wade is increasingly unprepared to give others.  As the story chugs along, Wade will gravitate further from Margie and more towards Glen.

The story is already in motion when the movie opens, but the plot begins with a supposed hunting accident that leaves a wealthy middle-aged man, Evan Twombly (Sean McCann) dead.  We see the lead up to his death, and we’re acquainted with Twombly’s bumbling ways.  He forgets to turn on the safety on his rifle, he trips in the snow, and by the time he dies, we’re trained to expect that it could be a self-inflicted accident.

That’s what local law enforcement believes, mainly Wade’s boss, Gordon LaRiviere (Holmes Osborne).  We soon learn of reasons Twombly could’ve been killed.  He was set to testify in some kind of big court case which in movie speak means he is ripe for assassination.  When Wade learns about this, he has it set firmly in his mind that Twombley was murdered.  Anyone who doesn’t agree must be in on it.

Affliction draws much more attention to this subtext that lines most of these kinds of stories.  Wade believes the death was a murder, and Gordon believes it was an accident.  They both have access to the same clues, and their different takeaways have only to do with their respective frames of mind.  Wade needs to believe this was a murder because he needs something at which he can direct all his rage at life, whether it truly stems from his father, ex-wife or otherwise.

This aggression drowns Wade and overtakes him like in Invasion of the Body Snatchers.  We see the root causes from the beginning, but the Wade we end the film with is a far cry from the Wade we meet at the start.  His transformation is extreme and reminiscent of the protagonist transformations you see in other Paul Schrader films, whether the ones he wrote like Taxi Driver and Raging Bull or his other directorial films, including Mishima: A Life in Four Chapters and this year’s First Reformed.

So Affliction just takes the subtext of the investigation movies and blows it up.  Wade’s investigation never feels idealistic, like one man determined to find the truth.  As his aggression mounts, and he further mimics his father, Wade further disregards the truth until we clearly understand that the stories he so frequently recalls are nothing like the truth.

There are two framing devices to keep in mind here.  One is those grainy flashbacks of Wade’s father, told from Wade’s perspective.  He recalls events that we are led to believe are truthful.  Then there’s the narration which bookends the film and reintroduces itself somewhere near the middle.  The narrator is Wade’s brother, Rolfe (Willem Dafoe).

Rolfe is a writer who has escaped from underneath their father’s thumb in a way Wade hasn’t.  Before we understand who Rolfe is, he establishes himself as someone outside of the situation, able to comment on Wade and the story with objectivity.  Only later does his story testimony conflict with Wade’s recollections of their childhood, forcing us to look at Wade with the same eyes as Rolfe.

Once we understand that Wade has become an unreliable narrator, his descent starts to speed up, and before we know it he has alienated the audience, joining the evil empire, so to speak.

Affliction is a story about parents and children.  It’s a warning and a call for empathy.  Rolfe’s closing narration describes how Wade had no choice in who he became because the fear and inability to connect with another human was bred into him by their father’s abuse.  It was fated for Wade to push away those close to him, to be afflicted with his father’s disease.

Rolfe makes it seem as though there is no hope and that all who have been abused will then do so themselves.  But then as he says, he himself got out, proving that the cycle can be broken.