When someone plays hookie from work, what they might have in mind is Ferris Bueller’s Day Off.  Ferris (Matthew Borderick) is a high school senior whom the adults would say is a slacker but who commands the respect of “the sportos, the motorheads, geeks, sluts, bloods, wastoids, dweebies, dickheads – they all adore him. They think he’s a righteous dude.”

He’s an anarchist who fights the system in the most polite way possible.  He embraces the moment, and though fueled by a little youthful reckless abandon, he’s onto something about life in general.  It’s also the kindness Ferris shows his best friend Cameron (Alan Ruck) that demands our admiration.  He’s a rebel, but he’s a kind friend, a true romantic, spontaneous in ways that won’t get you killed, and while Ferris never changes over the course of the film, those around him learn to be more like him.

Ferris is a blank slate.  In most movies a blank slate character is someone to whom we attach our own identities.  We put ourselves in their position and let the story roll from there.  We relate to their desires because we want those things ourselves.  But for Ferris, he doesn’t really desire much of anything because he already has it.  Instead, Ferris is like a shooting star we want to cling to.  He embodies things many of us, at least up until a certain age, aspire to be.

There are two characters who change over the course of the film.  One is Cameron, and the other is Ferris’ jaded sister Jeanie (Jennifer Grey).  She knows he isn’t really sick when he pretends to be, another trick which fools his oblivious but well-meaning parents.  Jeanie can’t stand that Ferris gets to break the rules while she must abide by them, but by the end of the film she realizes that her problem isn’t with Ferris but with herself.  In other words, don’t hate the player, hate the game.

Cameron is Ferris’ polar opposite.  While Ferris embraces the day, Cameron rues it.  The only reason he may not be depressed is because that would be too dark for the movie, but Cameron’s frame of mind certainly pushes that direction.  Take, as a visual, the ways each of them approach the day… 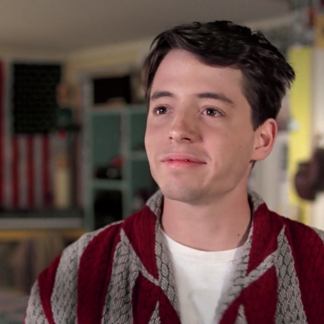 Ferris is like a newborn, someone for whom all the ordinary details of life shimmer while Cameron is a dead man who just hasn’t died yet.  By the end of the film he will have died metaphorically and been born anew.  Just to give you an idea, here are a bunch of screenshots of Cameron throughout the movie…

He’s just a guy who’s scared of life, knows it, and who by the end learns to be less scared.  There are two particularly noteworthy moments in this journey.  In one, he stares at the famous “Sunday Afternoon on the Island of La Grande Jatte” painting by Georges Seurat.  Cameron is alone for the first time since the “day off” began, and he’s enraptured by this painting.  The camera cuts closer and closer on the painting as well as on Cameron’s mystified expression.  As the painting becomes more grainy and abstract the closer we zoom in, it’s as if we can see right into Cameron’s mind.  He’s looking so closely at the painting that the image is distorted, resembling nothing like the pleasant Sunday afternoon the painting depicts.

It’s the same type of hyper-inspection as in Michelangelo Antonioni’s Blow-Up (1966), a film about a London fashion photographer’s obsession with an image that may or may not depict a murder.  He stares at the image for so long that he (and we) can no longer see the image with any context.  It becomes a rorschach test, and it seems to simulate the feelings of depression.  You look at life too hard, think about it too much, and soon you’re convinced you can see right through it, like witnessing the despair that everything else in life is there to cover up.

So Cameron is depressed, and I think this moment tries to show that.  Later he will sink to the bottom of the pool in a moment that references The Graduate, another story about a disaffected young man.

When Ferris pulls Cameron from the pool, worried he might be dead, Ferris screams, “Oh shit, Cameron, c’mon wake up!”  It’s the subtext of what he’s been saying to Cameron throughout the film, and this time, seemingly for good, Cameron listens.

The symbol of Cameron’s despair and angst is his dad’s red Ferrari.  It’s the car Ferris encourages him to let them take out for the day, and Cameron lets him even though he’s paranoid about his father finding out.  Cameron’s father loves the car more than he loves him, and at the end of the day, when they learn that the parking attendants took the car out for a joy ride, Cameron falls into a catatonic state.

After that pool-side rebirth, Cameron takes out his anger on the car’s fender before accidentally taking it a step too far and destroying the car.  After a moment he feels empowered, having overcome a certain demon in regards to his feelings of inadequacy and of general melancholy.

So Ferris is the guardian angel in some respects.  He’s a character with a lot to do, and he certainly has the most agency within the story, but he’s a character without much of an internal arc.  He wants to help Cameron (he does), he wants to marry Sloane (her last lines are “he’s gonna marry me”) and then there’s his Road Runner-Wile E. Coyote-esque rivalry with Mr. Rooney (Jeffrey Jones).

There aren’t a lot of adults in Ferris Bueller’s Day Off, and if there are, they’re mostly distant, oblivious or otherwise out of the picture.  The exception is Mr. Rooney.  He’s the dean of students who runs his high school like a prison.  Rooney has kept an eye on Ferris for some time now, and he’s concerned that the charismatic Bueller will begin rubbing off on the other students.  His goal is to prove that Ferris has been ditching class and to bring him to justice.

Ferris is an easy-go-lucky kind of guy, but he doesn’t want to get caught.  To Rooney, skipping class is akin to murder, and to Bueller, getting caught is the same as getting caught for murder.

Each character clings to something, but the film never mocks them in turn.  Sure, Mr. Rooney is a cartoonish villain, but he’s so much the villain, that I almost felt respect for him, and I think the film does too.  He’s so passionate, so involved, so creepy yet so determined to make sure one student goes to school.  Maybe, deep down under all the power-tripping insanity, he cares.

That’s probably looking too deep into it, but these are characters who have it in mind to undertake some kind of plan, and they bust their ass executing it.

Ferris Bueller’s Day Off is a cartoon adventure story with the central tension between an unrealistic chipper, popular and wholesome young kid and an unrealistic menace of a dean.  Around them, orbiting like small planets, is a group of human, struggling young men and women.  They are the ones who experience personal arcs, compelled to change by Ferris Bueller and the man he stands in opposition to.