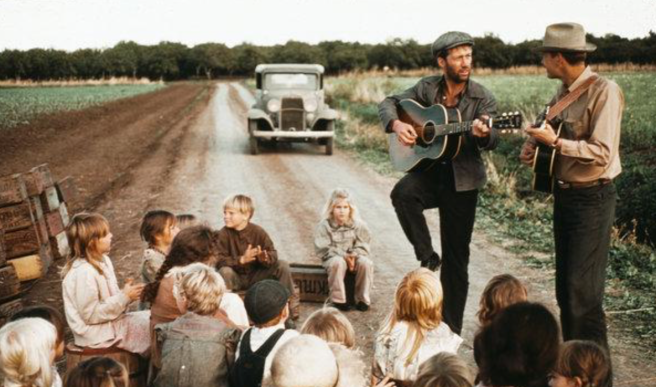 Bound For Glory feels like two separate films.  The first follows Woody Guthrie (David Carradine) from a tiny Texas town out to California during the Dust Bowl era of the Great Depression as he searches for work and a better life for his family.  The second tracks Woody’s rise from living in a makeshift workers’ settlement for struggling farm laborers to making it as a musician, all while he fights for workers’ rights.

I enjoyed the first half of the story much more than the second, mostly because it seemed to march to its own beat.  This is a biopic, after all, so Woody’s slow climb up the career ladder makes sense, but watching him walk and hitch rides out to California is romantic, aesthetically beautiful and heartwarming in a way the second half, to me, isn’t.

It’s in the first half that the film at least seems to be the most poetic.  Woody lives in Tampa, Texas, a town as small as that of Peter Bogdanovich’s The Last Picture Show.  These are towns that appear wholly unsupportive of human life, as if they were recently established settlements on Mars.

Early in the story Woody watches as those around him struggle for work or flee for supposedly greener pastures.  They weigh down their small beetle-like cars with just about everything they can carry, sometimes doubling to tripling the size of their car.

For his part Woody remains back home with his family, unable or unwilling to look for the kind of work that is available and suffering through the occasional heavy dust storms which approach the town like signs of the apocalypse.  Soon enough Woody will decide to leave, saying nothing to his wife and kids other than leaving a note and hopping on the first car that passes by.

From there he meets a few scattered travelers as he hails rides from passersby and then learns how to sneak his way onto passing trains.  In one instance David Carradine struggles to climb onto a real moving train and, according to Hal Ashby’s biography (written by Nick Dawson) he really was a foot or two away from a possibly fatal accident.

It’s in this section of the film that I thought the story really rang true.  It takes its time, just as Woody does, and becomes contemplative while he lets life take him wherever it’s going to go.  It’s also in this section of the film that it seems you can see him formulating all of his beliefs, theories and attitudes about people, life and capitalism, things he will express as he develops more agency in his own life and career.

Woody, as presented in this film, is a wise old soul.  He’s only ever barely surviving, but he goes about his days with a certain kind of affable grace.  You can feel him taking in the things around him, whether that’s watching a fellow traveller be gunned down from atop a train or just testing the reaction of an upperclass man and wife to one of his more crude jokes.  No matter what happens, such as when he’s kicked out of this latter couple’s car, he takes it all in stride.

Eventually Woody makes it to California, but when he gets there he’s exhausted from hanging onto the outside of a train car for a number of hours.  He crumples to the ground and promptly falls asleep before a few hours later awaking and strolling into town looking for work.  This effort will introduce him to a couple more people, similarly struggling in the crowds of people who have come out west looking for work, as part of the mass migration during the Great Depression.

While he lives with many of these folks Woody will meet a local entertainer named Ozark Blue (Ronny Cox) whose shouts of “Union! Union! Union!” provide some of the funniest moments of the film.  He’s a folk singer who often comes into these constructed villages to entertain, but more importantly to rile up the poverty-stricken laborers.  When he discovers that Woody can sing a song or two he helps get him on his feet and get into the recording studio.

From there Woody becomes a devout supporter of workers’ rights while figuring out the challenges of succeeding in his own right as a musician while refusing to give in too strongly to the capitalist system of which he is now a part.  At a later point in the film he will shake his head, saying it “seems like it was easier to put up with nature and dust storms and all then it is to put up with greed.”

Bound For Glory is a beautiful-looking film, bleached and faded as if by the sun itself.  It is also the first instance of a steadicam shot, invented by Garrett Brown who operated the camera in one long shot in which Woody, while living in the laborers’ settlement, hops off a truck and then walks through a crowd of hundreds of extras.  It’s not too showy, but it does immerse you within this community.  It’s an interesting effect that I can’t quite put into words, something that makes the film feel a little more modern and the location feel a little more real.

The film is directed by Hal Ashby who made a name for himself as a director in the 70s following a long career as an editor through the late 60s.  His career would slow down in the 80s, but Bound For Glory finds him right in the middle of his heyday.  The story here, a period piece Great Depression odyssey wouldn’t seem to vibe with his subversive comedies like The Landlord, Harold and Maude or Shampoo, but it instead surely had some more personal appeal to the director.

Ashby came out to Los Angeles, like Woody Guthrie, with barely any money in his pocket, looking to start his life over.  He came from Utah where he had a wife and a daughter, but again like Woody he left them behind in the pursuit of a dream.  For Woody, he leaves a note insisting he will send for his family, and though he owns up to this, his marriage will fall apart after she and the kids follow him out sometime later.  He may have had it in mind to do this for his family, but he was surely drawn by his own impulses to follow a dream he held dear.  The same can be said of Ashby who may not have known why he wanted to come out to Los Angeles other than to latch onto something he knew he hadn’t yet found in life.