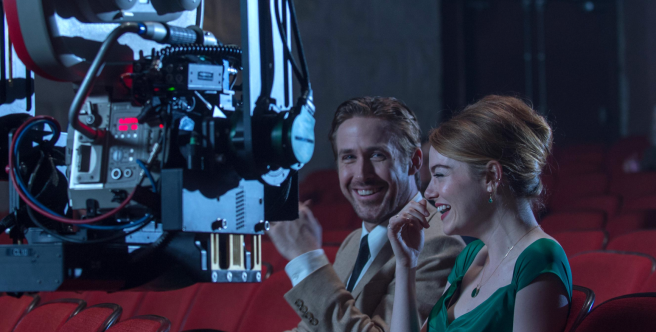 EDIT: Not so much an analysis of the movie as much as me getting defensive about why I like it so much.

It’s nice to fall under a movie’s spell.  La La Land, to me, is a sweet, tender, intimate yet massive, nostalgic fairytale about dreams, dreamers and good fortune.  It’s unrealistic, sure, but so are all the movies this pays homage to, whether the musicals of Gene Kelly/Fred Astaire/Ginger Rogers or the 1964 Jacques Demy film The Umbrellas of Cherbourg, from which La La Land draws much of its inspiration.  It’s actually that Demy film which made me want to revisit La La Land.

I’m really not sure what to say about the movie because it’s been picked apart endlessly by now, particularly in the run up to the Academy Awards a couple years ago, just as every front running film seems to be deconstructed and nitpicked following its initial critical acclaim.

The Academy Awards are fun, but the pageantry and whatnot has a way of doing disservice to the films themselves.  You can’t really talk about the same thing for that many months ahead of time and expect to maintain any proper context of what you’re discussing.  When I first saw La La Land I was more engaged with it than any other recent moviegoing experience.  If I had any hangups, concerns or disappointments I promptly forgot about them and just let the current carry me through to the end.  And yet, I’m sure I was tired of talking about it by the time the Academy Awards came around.

The story itself is broad and fairytale-like, which isn’t for everyone and not even always for me, but the underlying emotion pulsates through every moment of the film.  It’s alive, it’s funny, it’s melancholic, and it’s, well yeah, it’s just alive.  It feels like a living, breathing experience, not just a series of plot points and contrivances, no matter how conventional aspects of the romance are, but just a strange cinematic organism.

I also can’t help but marvel at and even grow anxious thinking about all the work that went into this.  The music has to be captivating for it to even work, and then you add in all the performative elements, the training for Ryan Gosling to learn how to play the piano (for example), and ‘little’ things like how they closed down a section of a freeway overpass to conduct a massive dance number.  The camera’s constantly moving, there are many, many dancing extras who as dancers have to do more than the average movie extra.  The music on its own is beautiful, constructing multiple variations of the same theme, as you do often see in musicals but which nevertheless reverberates through the movie.

This is a mess of a review, I was just so taken with this movie from the first time I heard about it (especially after loving so much Chazelle’s previous movie Whiplash) and then again when I saw it.

It’s not a movie for everyone, that much has been made clear to me.  2018’s A Star is Born seems like a logical equivalent to this movie, but that’s one that I couldn’t really attach to.  The melodrama and plot contrivances, which are very much in La La Land, just stood out in Bradley Cooper’s film in a way they didn’t seem to here.

So I guess movies like these, that try to tug on your heart strings and take you on a bit of a rollercoaster, they have to work in broad strokes and deal with melodrama.  It’s just sometimes you feel those twists and turns despite the mechanics, and other times you can’t help but notice the seams.