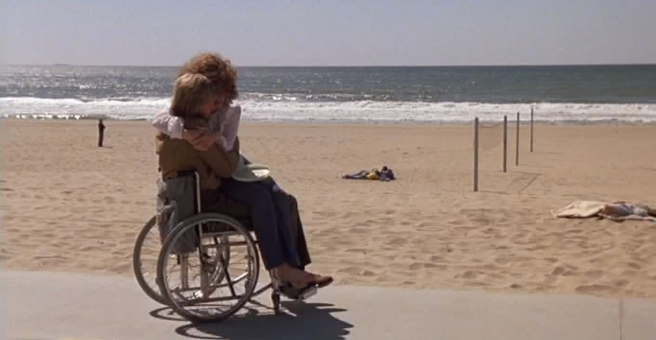 Hal Ashby once worked as an editor under William Wyler, and Coming Home has a lot in common with Wyler’s The Best Years of Our Lives (1946).  Both are anti-war films concerning the tough readjustment into society for several returning veterans.  Ashby’s film tells this tale through a romance between Sally Hyde (Jane Fonda) and disabled veteran Luke Martin (Jon Voight), while Sally’s husband Bob (Bruce Dern) is currently redeployed back to Vietnam.

Luke, paralyzed from the waist down and with his hair long and shaggy, is a perfect counterpoint to the career military man Bob Hyde.  The film opens with a group of actual veterans shooting the shit while playing cards, with Luke, laying down in a gurney because the military hospital is short on wheelchairs, only listening.  They speak of the terrors they saw and the reasons some soldiers need to believe that it wasn’t all for nothing, simply because to believe such a thing, considering what they’ve done and lost, could destroy them.

We then meet Sally and Bob as Bob is about to ship back out, almost gleefully.  He knows nothing but the military, and you get the sense that Sally is only a small part of that life.  She is afraid to see him go, and it might just be that anxiety which informs her stoicism while we see the two of them together.  When Bob leaves, however, Sally will take the first steps towards a transformation that takes her away from him.

The love triangle, such as this is, could feel melodramatic and forced in a story that is truly just about the horrors of war, except that in Coming Home it’s Sally’s journey which frames the entire film.  Her love for Bob and then Luke directly correlates to her own awareness of what is happening in a war she only barely understood at the start of the film.

It’s when she starts volunteering at the veterans’ hospital that she starts heading down this new path.  The veterans here are maimed and paralyzed, and even those whose bodies work well enough find themselves burdened with mental instability, whether just nightmares or outright schizophrenia.  One of these patients is the younger brother of her best friend, Vi (Penelope Milford).

Horrified by the realities of the other side of military service, Sally tries to raise some awareness, but she quickly finds out what the veterans already know, that no one cares.  They’ve been used up and discarded.

Luke is already against the war, understandably, when we and Sally first meet him.  His deep-seated anger, which you get the sense has already dampened, lightens when he and Sally develop a relationship.  His character is based on Ron Kovic, the paralyzed Vietnam veteran whose book Born on the Fourth of July was turned into the Oliver Stone film 11 years later starring Tom Cruise.  In Coming Home Luke is already where Kovacs will end up.  Here he has no real journey to go on, mostly because he’s one end of the spectrum towards which Sally gravitates.

Again, this is Sally’s film.  She’s the one who changes as the story goes along, not just in her stance on the war but as a person too.  When Bob is redeployed she will move off of the military base where they had lived and into her own apartment close to the beach.  She buys a sports car, stops straightening her hair and even the volunteer job at the veterans hospital goes against Bob’s wishes.  She becomes her own person.

Just as Luke is the fictionalized version of Ron Kovic, Sally is the fictionalized version of Jane Fonda herself.  Fonda was an outspoken critic of the war, drawing much backlash in the early 70s, particularly after a 1972 trip to Hanoi in which she was photographed sitting on an anti-aircraft gun (while giving in interview) which was likely used to shoot down American planes.

Coming Home is the product of several anti-war voices, including Hal Ashby himself.  It’s an important film, not just because of its stance and the time in which it was released but because of the care it takes to show some of the details of life as a paraplegic.  Though ostensibly still a ‘war film,’ Coming Home features no footage of the fighting and thus no possibility of even accidentally glamorizing the war (something which, in movies, is easy to make heroic or at the very least exciting).  It’s in contrast to another famous anti-war film of the same year, Michael Cimino’s The Deer Hunter, a devastating film which charts the progression a few friends as they go through the military, with the focus on their time in the war.