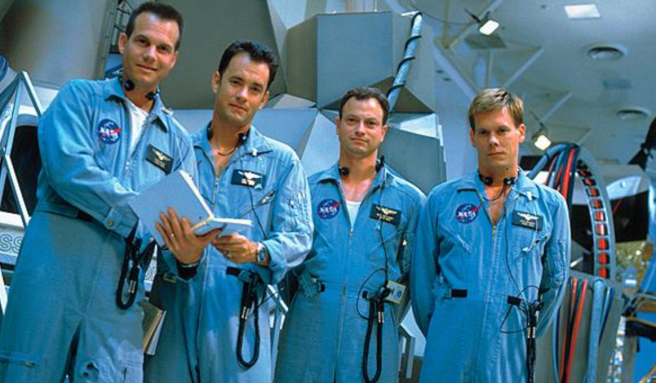 Around halfway through Apollo 13 there is an unexpected dream sequence.  Astronaut Jim Lovell (Tom Hanks) looks longingly at the moon as he, Fred Haise (Bill Paxton) and Jack Swigert (Kevin Bacon) orbit, seemingly close enough to reach out and tough the cold surface though unable to complete the planned descent to the lunar surface.  Up until this point all Lovell has wanted is to walk on the moon, following in the footsteps of Neil Armstrong and Buzz Armstrong, but thanks to a minor explosion earlier in the mission they must instead spend all of their energy figuring out how to simply get home alive.  In the dream sequence Lovell imagines what it would be like to step on the moon, and once it’s over he allows the dream to die so they can get back to more practical matters.

So much of this movie feels routine, at least for this kind of true story survival epic.  They head off into some kind of abyss, face a potentially disastrous problem, then work together to make it home safely.  As far as space movies go this has a lot in common with Gravity and The Martian, for example.  If anything I think this movie might be a little less interesting than those movies, just in terms of process.  Like with Hanks’ Cast Away, the most appealing part of these journeys onscreen is observing the step by step process of how they survive.

But Apollo 13 has a lot else going in its favor.  It’s a thrilling survival story with fully realized characters, not just the astronauts but those on the ground as well.  The image of Ed Harris in mission control is certainly iconic (his voice would be used in Gravity and he played John Glenn in another space movie, 1983’s The Right Stuff), with him being just one of many silent, stoic heroic figures in the film.

It all builds to a rousing finale that’s so pleasing because of the purity of spirit which led up to it.  It’s a bunch of smart people working their ass off to get three men home safely.  It’s a narrative that fans the patriotic, idealistic flames and calls for a simpler time.  I guess when survival is at stake, nuances are erased and the conflict becomes almost appealingly black and white.

One of the running subplots here has to do with the public’s apparent apathy towards the Apollo 13 mission.  Whereas millions tuned in to watch the Apollo 11 mission, now that the Americans had been ‘first’ to set foot on the moon, what was the point in going up again?  One person poses this question to Lovell who takes it in stride and appeals to the idea that humans can’t help but explore the unknown.  Whereas other pilots and missions may have been fueled by competition and patriotism, Lovell is driven by a deeply internal longing.

I guess that’s just to say that the longing Lovell feels isn’t shared with the American public, again at least as it’s presented here.  Whereas the Apollo 11 mission held live broadcasts which many watched live, those same broadcasts here are ignored in favor of whatever baseball game or gameshow is currently airing.  Lovell’s elderly mother complains when the orderly at her retirement facility can’t find the Apollo 13 broadcast on tv.

Of course that all changes when it becomes clear that the Apollo 13 crew may never return home.  The nation is united and riveted by the possible failure, and this implies a certain morbid curiosity that most definitely exists in the real world, but Ron Howard’s film is much too optimistic to suggest this.

Apollo 13 is really just a very, very optimistic, positive film.  It’s heroes and hard workers and many shots of nervous looking people breaking into applause and embraces.  It’s probably the most positive movie about a critical disaster that I can think of.  As Ed Harris’ character says at one point deep into the thick of the crisis, this may be a chance for NASA’s finest hour.

In a sense it’s a trial by fire.  You can only see what you’re made of when everything conspires against you.