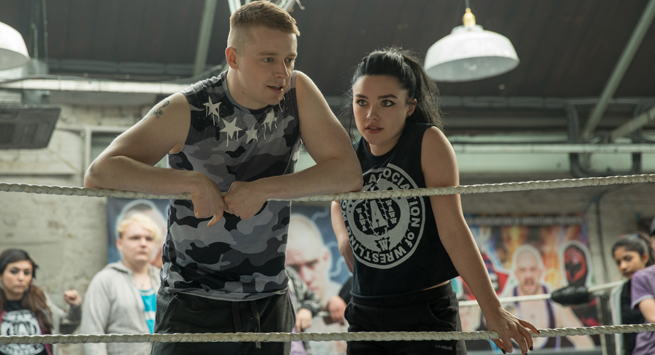 Fighting With My Family lets you know right up front that it’s based on a true story, something I promptly forgot until we see footage of those real people alongside the end credits.  It’s the story of a working class family from Norwich, England who loves wrestling.  Brother and sister Zak and Saraya (Jack Lowden, Florence Pugh) dream of making it to the WWE, and when a talent scout (Vince Vaughn) comes through town he gives them a shot.  Saraya is chosen, Zak is not, and thus begins act two.

The narrative alternates between Saraya as a fish out of water in Florida and Zak back home struggling to put himself back together after his dream is crushed.  I found both stories equally compelling, and they complement each other in ways that feel both sincere and formulaic.

Much of this movie is formulaic, I mean it all is, but I think as a “family” movie it gets away with this.  Or I should say that if you’re as charmed by these characters as I was, then you forgive the various story tropes and cliches.  They learn the things you expect them to learn by the end, and the happy family, once torn apart by ego, jealousy and fear, is made whole again.

The movie as a whole is remarkably ‘neat.’  It’s like one of those IKEA display rooms you walk through, looking unique enough to feel homey but also so incredibly artificial.  Fighting With My Family has very little flare, from what I can tell, whether that’s visually or even narratively.  It’s just a neat, well-told story that stays on the beaten path.  This works for the most part because the characters and their world are so endearing, but sometimes is strains credibility.

An example is when Zak and Saraya are forced through the tumultuous section of the story.  With her in Florida and him back home, he won’t talk to her because he’s seething with resentment that she was chosen over him, and this builds and builds until he becomes a bit psychotic.  It’s all part of the typical modes of storytelling and heightening, meaning the seething must remain until it can boil over so that the conflict is impossible to ignore, but that escalation of the conflict makes him quite hard to like.  It boils over when they fight each other in the ring, and rather than following the “script” of the fight, he literally beats her up.  F*ck that guy.

But then he makes up for it, at least in the eyes of the other characters because that’s how these things work.  Because the story follows those conventions, of when characters must like or not like each other and when they must feel alternately powerless and powerful, these individual moments might not resonate as well as if they were less predictable.  Or maybe the narrative arc has become so ingrained in how we tell and consume stories that it really does just work that well.

Because I think it works quite well, all that being said.

Act two takes Saraya to Florida, and she quickly becomes the supposed underdog.  We’ve seen this movie before, complete with the rivalries with other competitors turning into friendships as well as that training montage before the big final battle.  It’s all here in full display but with no sense of self-awareness, for better or worse.

When it works it’s because Saraya’s story appeals to the underdog/outsider within each of us.  Whether it’s Edward Scissorhands or any of the introverted heroes of a coming of age young adult movie, these stories work and are told repeatedly because they ring true on some level.

When it doesn’t work this time around it’s because the movie flattens out the other characters around Saraya in order to make her more likable.  That means that the three conventionally attractive models fill that “bully” role, the characters who look down on Saraya and help perpetuate her isolation.  They are judgmental and inexperienced as wrestlers, chosen only because of their looks, something which rubs Saraya the wrong way since A) she doesn’t look like them and B) she actually knows how to wrestle.

We are meant to dislike them because they dislike our Saraya… or so it seems.  Then Saraya realizes that it’s she who hasn’t been nice to them, and then she flips the switch and they become best friends.  I mean, it’s certainly appealing, who doesn’t like watching people bond, but it’s all quite forced.  The story is obligated to make them seem vapid, self-important until it’s time to make them three-dimensional.  This feels manipulative, and I think it leaves unanswered certain questions or ideas I’d like to know more about.

For one, the idea that WWE hires women who can’t wrestle simply because they look a certain way, well that seems problematic, especially since there are people like Saraya who do know how to wrestle.  When this is brought up in one scene, with the other woman accidentally assaulting Saraya three times because she doesn’t know how to properly pull a punch, Saraya delivers a “receipt,” a slap in retaliation which she says is how you learn not to hit the other person, by feeling what it’s like to be hit yourself.

While you may not like that method, it at least brings attention to this very real concern, that these women can’t fight.  Saraya is then told to apologize to her opponent, and the stories movies on.  Boom, it’s Saraya who is at fault, but really isn’t there fault to be spread around?  Why can’t those women properly fight and how will they be trained to properly fight?

The movie solves it with one of those training montages in which they can suddenly demonstrate proper form, yada yada yada.  So much of the detail is washed out to tell a familiar, albeit reassuring underdog story about acceptance, identity and family.

Wrestling in this movie could be replaced with anything else.  What matters is the community it fosters, and that’s the best part of the movie, watching that community develop.  It’s not just within the family but with the children Zak is training to wrestle, including a blind kid (one of the best lines of the film is when Saraya points out just how absurd and amazing it is that he can turn a blind kid into a wrestler), as well as the family absorbed when Zak learns his girlfriend is pregnant.  Then you see it, of course, in Saraya’s storyline with the other wrestlers and the WWE community as a whole when she’s in the ring.