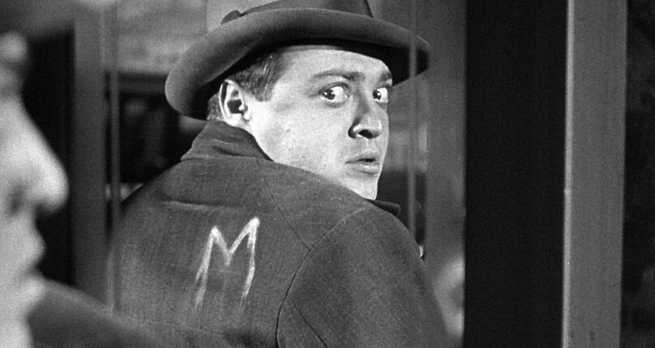 Holy sh*t is this film alive.  From the unexpected twists and turns of what has since become a fairly standard, predictable type of story to the daring use of silence and mind-boggling camera movements (still not sure how they pulled them off), there is a lot to admire in Fritz Lang’s M.

When a whistling child murderer strikes again, the police go to drastic lengths to make sure it’s the last time.  This is a town small enough that everyone seems to know the other, but one big enough to contain a legitimate crime ring.  It’s the police and this group of underground, buttoned-up criminals who act separately to capture the killer.

That’s because the police begin late night raids at random, throwing into chaos the business conducted by those criminals.  One man will complain that there are more policeman out on the streets than women.  In other words it’s really killing their buzz.

To get the police out of their hair, the criminal bosses decide to take matters into their own hands and use their network of beggars (an actual thing back in the day, it seems) to put eyes all over the city until they find him.  They come up with this plan in one of the most telling, dramatic and stylized sequences of the film, cross-cutting between the police and the criminals deep in thought, both sets of men almost identical looking, smothered in cigar smoke and pensive expressions.  The implication is clear, that they’re not so different.

In the end it’s these criminals who make the most headway into the mystery.  They eventually trap the frightened, feral killer who becomes almost sympathetic as he’s cornered.  He will then get his moment near the film’s end, shouting to the group of kidnappers about his own unbearable compulsions and suggesting they are no better than him, based at least on their own criminal records.

A lot is thrown at the viewer here, and there is a lot which is left up to the viewer to decide.  From where I sit, it seems like everyone is indicted to some extent.  There is no simple good and evil, as it might seem at the very beginning when there is literally a man stalking and killing children.

M begins in broad, even melodramatic strokes of classic good and evil and slowly blurs the lines.  From what I’ve read this must surely have had a lot to do with Fritz Lang’s experiences in Germany at the time.  Himself Jewish, he was witnessing the rise of the Nazi Party whose cause even his wife joined.  He, and actor Peter Lorre, both fled the country in the coming years.

As of now the only Lang films I’ve seen are this one and Metropolis (1927).  Both are pretty amazing stylistically, revolutionary in their own right.  Beyond that, however, they both deal with a great deal of groupthink and mob mentality, and both films feature a climactic scene in which a large gathering of people persecute another.  In Metropolis they burn at the stake the woman they believed to have been their prophet (after she pushed them down the wrong path), and here they put on display the killer, under the guise of a fair trial (though they only proclaim that he should be killed).

People as a group, he seems to say (quite understandably), can be very ugly, quick to anger and poor in judgment.  The individual, however, might be more insightful and thoughtful, but what does that matter when they so quickly dissolve into the crowd.